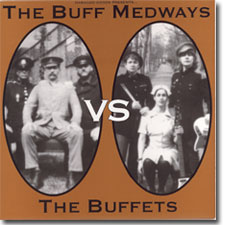 A split EP between two Billy Childish projects, in thr same way that he used to have Thee Headcoats and Thee Headcoatees, he now has The Buff Medways and The Buffets.

I'm Glad I'm Not Like David Wise is a track taken from the Medway Wheelers LP. Just 15 is a cover of a Buff Medways song from a single. Ivor is a cover of The Who.

In March this year The Buffets released a full lenght entitled Saucy Jack. The cover of Ivor was taken from the LP. The band members are

Ludella Black is credited with vocals on Just 15. I am not so good with matching fake names to known Childish associates faces, but I am sure that the drummer is Delia of Mambo Taxi, Family Way, The Action Time and many other bands.

If you are a fan of Billy Childish (and who isn't!), you may want to pick up this EP for the two exclusive tracks: Just 15 performed by The Buffets, and What You Got from an XFM session The Buff Medways recorded.