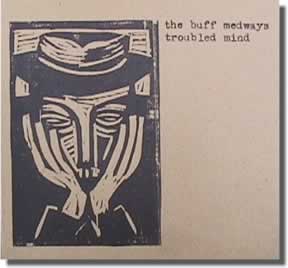 Anyone doubting that Billy Childish's post-Headcoats band, Wild Billy Childish and the Friends of the Buff Medway Fanciers Association (The Buff Medways for short), could match the prolific output of Thee Headcoats should, at least by now, have reconsidered. 2001 was a big year for the Medways with the release of 5 singles and their first full length, 'This is This.'

'Troubled mind' is the Medways' 7th single and the first to feature a song from their new album 'Steady the Buffs.' And while the song (A side: 'Troubled Mind') was first recorded with Thee Headcoats as 'Troubled Times' in 1992, the Medways refuse to be written off as the nostalgic project of a washed-up pub rocker. In fact, I even prefer the Medways' version of 'Troubled Mind ' to Thee Headcoats' 'Troubled Times.' The newer recording is slightly sped up with much tighter drumming, speeding the song into the choppy choruses where everyone lets up so Billy can yell 'to ease..my troubled mind.' The syncopated pause right after 'to ease' really makes this song one of Childish's best and one of my favorites from Thee Headcoats. The production on 'Troubled Mind' makes it sound less polished than 'Troubled Times,' furthering the appeal of the newer version.

On the B side is a cover of 'Leave My Kitten Alone,' a song by Little Willie John, an R&B singer from the 50s and 60s, and while its blues-y shuffle is hard to resist, 'Troubled Mind' is still my favorite. Even after hearing Thee Headcoats do it so many times, I can't get enough of this song. It's no wonder Childish chose to rerecord it for 'Steady the Buffs.' Another excellent recent Buff Medways single, 'A Strange Kind of Happiness' also appears on the full length. I can't wait to hear the whole thing!