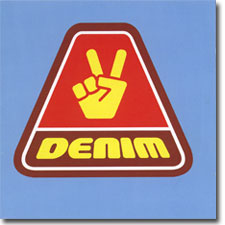 Lawrence Hayward is the man behind Denim. Originally the founder and guitar sound of the avant pop band Felt. Felt was known for moody and deep lyrics with a arty pop sensibility that played with the structure of pop traditions. Far too experimental to be commercial, too literate for sheep-to- slaughter adulation of the masses. Felt was unnerving and was setting out to create a new structure of pop. Intelligent and deeper revelations beyond love and longing.

Felt mixed the sensibility of the Velvet Underground and spawn bands like Television. Denim is a band that takes its cue from the seventies but not from the arty and obscure influential powerhouses of the seventies. This band takes its cue from "glam-rock". With Hayward's penchant for smart material it seems ironic that he would chose a style of music that is known more for ego, hair, and self-indulgence. It's not that far a leap since intelligence and artfulness is considered self-indulgent.

Hayward has used Denim to adopt that which he despised about the era by co-opting. He has put on the uniform and made all the right references to get in the club. Now that he is in he can drop his mind bomb and cut into that which he breached. He is the fly in the glam-ointment.

The song titles make no doubt that this is high irony. Songs like Back in Denim, The Osmonds, American Rock, Livin' on the Streets. The only thing missing is a negative reference to disco. The cheesy graphics have a 90's club sensibility mixed with retro-seventies, commercial, pseudo-political iconography and paraphernalia. The feeling is definitely American and bold. The colors are not all-american red, white and blue they are less harsh with the  a faded blue jean hue. The addition of brown as an overall color is earthy but also seems like a fecal jab. The yellow is like a warning sign. Now who's getting self indulgent?

The album starts like new wave meets We Will Rock You. The title track, Back in Denim, is an interesting start. Released in 1992 this was his first reintroduction to music since the band Felt fell. This track is an anthem in a cast of malaise. It is woo- hoo, we'll rock you. But you know one thing from this synth based tongue-in-cheek rallying cry, he's back and he is in Denim.

Fish and Chips is more new wave than seventies but it does have the sweeping seventies glam sound. You can squint your ears and make out some of the vocal sound of Felt. The real/not real drums and synth certainly put you in the mind of seventies keyboard acrobatics. But I am not buying it despite great guitar work, production and composition I am annoyed. The repeating, again, of the lyrics, I want to go there, is really saying-I'd like to got there, NOT!  I am not getting it.

Bubblehead has a great intro. The guitar work is superb. T-Rex is in there. But it keeps swinging from serious to camp via the keyboards. The song is too long and never finds it's foothold. Middle of the Road comes in like the Velvet's Can't Stand It. It bites at Eddie Cochran, Blue Suede shoes and all the pop traditions of the pop pantheon. Like Bubblehead before the intro is great but  stays steady and on course. Even though the song mocks all the riffs and stylings of pops past it deftly adopts them and makes for the first song where irony, adaption and camp combine in earnest.

The Osmonds is an eight-minute ode to the family band's status as a barometer for the culture of american commercial society. The Osmonds were everywhere. Playing like a ballad Hayward talks about the past as a survivor of a time when the USA wanted to feel good again. Too many ex-hippies hanging around and then came the Osmonds with their feel good hope. There is contrast in the song as the lyrics compare the heroes of the violent and chaotic sixties and now the feel good Osmands are everywhere. It is a another successful link of smart pop crafted into a track with scope and vision. This song is seriously sculpted and highly enjoyable and you can think while you bop. I did.

As the album progresses you can hear Hayward's influence and vocal sounds. I Saw the Glitter in Your Face is the most Felt like in vocal sound and ballad arrangement. The vocal are off but there is some very good musicianship and the song plays like white, seventies, soul ballads. The guitar is the thread that pulls it through. The title has a cringe factor and the lyrics do, too. But the music and emotion are pure nostalgia, sans camp.

American Rock is an ode to love. American Rock. Is there any wonder the world is falling in love? The song has some hot chops and licks and is a  successful seventies re-adaptation of the love ballad. It comes across as camp but it becomes far more serious as it comes to its conclusion. Despite its familiar sound it is hard to place the influence of one band but it is easy to hear an era.

I'm Against the Eighties is the final track and starts weak but builds to be a long and mutil-leveled opus. By the end it is a stew of all Hayward's Felt and seventies standards. You get the power chords, the big drumming, the anthem, the tender ballad. By it's conclusion it is enveloping. Unfortunately the beginning and end are in such contrast that it is hard to imagine that the average listener could stick around for that transition. It is long and long doesn't work in the nineties. I miss guitar solos.

By the last three tracks, I am done with the CD and the Denim is down to the fray. The problem with adaptation as irony is that it never makes a commitment to one or the other. The more adept moments found in, Middle of the Road and The Osmonds are too far and few between. When you read the lyrics there are some very poignant statements mired in a musical style that seems insincere. I can respect his attempt at making something so shallow be sincere but it is a risky balance.

Some may find this album a fashionable reprisal when it is really despisal. Enough time had past from Felt that younger listeners may adopt the fashion and never read or listen to the lyrics and just get into the fact that the seventies are cool again. Denim's material runs the risk of clashing with intent and reception like Chumbawumba's  Tub Thumper and Nirvana's Teen Spirit. If Denim is adopted as fashion and no one hears what is being sung it has been unsuccessful. An old Felt fan will certainly be angry at the abrupt rebirth. If any fan gets it and rally's around the Denim flag, what is the point? Where is the victory? What has been accomplished?

I can understand an artist in desperate need of change. I can understand an artist that wants to shed his past to come out the other side with a fresh new perspective. If you are a true fan of Lawrence Hayward's career then you maybe more accepting. Hayward has gone to the past to say that the past is over. Like the intrinsic era of the sixties transitioned into the insincere seventies, Hayward has done the same musically and with irony.

That is the trouble with adaptation as irony. It is also the trouble with making something sincere that is essentially insincere. If you are swimming in a shallow pool it doesn't matter how hard that you dive down. You will just keep banging your head on the bottom. No matter how you package Velveeta it is still artificial.