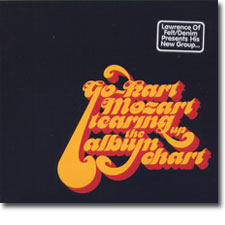 Go Kart Mozart makes music in the style of brit-pop.  The band hails from Birmingham and was founded by Lawrence Hayward. Their name comes from a line from the lyrics of Blinded by the Light, a song by Manfred Mann.

Lawrence is primarily known for his work in the band Felt from the '80s.  After the Felt years, he formed a pop band that lasted for three albums called Denim.  His latest, Go Kart Mozart, has just released its second album Tearing Up the Album Charts.

Lawrence is a bit of a cult figure in the UK music scene, having been referenced and praised by the likes of Pulp, Belle and Sebastian and Saint Etienne, among other bands.  He still remains kind of a misfit and a recluse.

Tearing Up the Album Charts captures his love of suburbia and pop music in an uncanny way.  It is a clear homage to glam music of the '70s and carries on in a DIY appropriation of that style—all catchy guitar riffs and keyboard solos.  One song on the album, Fuzzy Duck is a litany of '60s and '70s obscure band names taking in Bacon Fat, Plastic Penny and Ultimate Spinach.  This should ground the listener in the appreciation of trash culture that Lawrence revels in.  He explores the jaded and empty spaces of suburbia through short pop songs that rarely exceed two minutes.

The entire album lasts precisely 33 minutes, which is perfectly respectable for a pop disc. Most of the songs come from Lawrence's personal experience as mediated through the prism of popular culture.  That said, most of these songs deal with being unemployed and going out getting wasted on drugs. Crystal Meth abuse is the subject of At the DDU, while Donna and The Dopefiends has to do with the relationship he has with his female drug dealer.

The interview on the right sidebar of this review mentions that the song Transgressions is about a trend for spraying Lynx body lotion on to your tongue for a cheap high.  Lawrence also discusses '70s pop ephemera, the song, Listening to Marmalade regards the '70s band Marmalade in a fond light.  An album like this is a nostalgic speed freak's trip through the underside of decadent nowhere towns in the UK. .

Go Kart Mozart in the gullbuy: