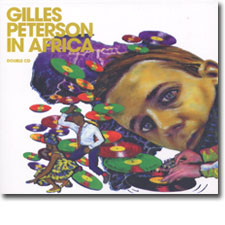 He ushered the Japanese DJ duo Kyoto Jazz Massive into a recording studio to compile artists from thier club night back in 1993, resulting in the collectable Kyoto Jazz Massive club jazz compilation with its unforgettable cover art.

Even though the discs are split into old and new, some crossover does occur. For instance, disc 1 has Toshio Matsuura of United Future Organization (Japanese acid-jazz group) doing a remix of an Abdullah Ibrahim track, and Brooklyn's Antibalas Orchestra doing the very politial Indictment, which namecalls Condoleza Rice and others.

The Spirit (CD 2) does not sound very different than The soul (CD 1). Masters At Work's tribute to Fela Kuti sounds like it could have been a Fela track. The Carl Craig remix of Cesaria Evora's Angola gets lifted from her Sodade remix album. Even though many of you might already know this version, I don't think anyone will mind hearing it again on this collection, as Carl Craig did such an amazing job with it.

Osborne's Afrika includes sirens and a lot of tribal percusssion and instrumentals. Like most songs, it is sung in African tongue. Osborne in a Detroit electronic artist with three 12inch singles on Spectral, the dance-oriented offshoot the label Ghostly International. Afrika is the A-side of one of them. I'd like to hear more!

The Thievery Corporation / David Byrne collaboration The Heart's a Lonely Hunter really comes of well - it is my favorite piece from either of them in some time. It is as good as the song Lazy he recorded with X-Press several years ago.

Blaze are a band that has been around for a while, and still records for the pioneer NYC disco label West End. Blaze close out the collection on a Afrobeat collaboration with Palmer Brown called Jump 4 Luv. The two have collaborated before, on the track Slip 'n' Slide, which was remixed by Bob Sinclair.

There is lots to recommend about this CD. Even though the packaging makes it look like another superstar DJ set collection, it is anything but. These tracks would work better in a Nigeria roadhouse than a dance club. They have enough heart and soul to work ANYWHERE an open ear finds them.