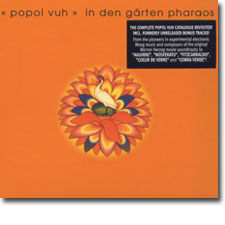 In den Gärten Pharaos (In the Garden of the Pharaoh) was the second album by Popol Vuh originally released in 1971, which was reissued on SPV in 2004 along with the rest of the Popol Vuh catalog, with bonus tracks for each disc.

At this point in their career, main man Florian Fricke was still highly inspired with the Mayan influence, so their second album doesn't veer that far from what was included on their debut album, Affenstunde but does improve on that sound in many regards.

This time out there are two almost 20 minute tracks which make up the original album, each filling up a side of the album. The title track combines together a reverent brand of keyboard minimalism with the bongo drums we heard so frequently on the debut for an organic journey in sound. The track is given ample time to open up, as it progresses for it's 17 and a half minute length, and it will be over before you know it, as it peacefully comes to a close with pulsing bongo tempos and Fricke's organ and keyboard flourishes. The track culminates with the meeting of these two parts in a rhythmic conclusion.

The second track is the nearly 20 minute Vuh. Opening with the sounds of organ and cymbal swells and an opulent but minimalist melody, Vuh is a track which sounds like some of the soundtrack music they would record for Werner Herzog's films. It also sounds the most like the sacred music they would soon be recording. Vuh builds up into an incredible swell of organ, cymbals, wordless vocals and percussion to be one of the classic early Popol Vuh tracks.

Popul Vuh in the gullbuy: