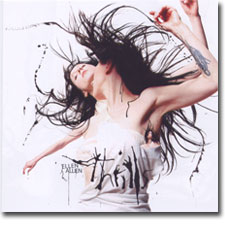 The album has three vocal tracks (Your Body Is My Body, Down, Magma) and seven instrumentals.

It is a good record. Ellen no longer has the immediate propulsion of the electroclash movement to zip her records to fame. Now she has to earn her acclaim like everyone else, and Thrills does a good job of it.

Last year she had shown signs of becoming a straight techno artist (the Astral 12inch and My Parade mix CD), but on Thrills she presents a blend of several styles, including techno.

The record includes her current single Magma. Magma is a fine track. the remixes of the 12inch don't sound as good as this original album version to my ears.

The CD also includes a video for Down (probably my favorite track on the record). It is wierd and conceptual. The video has a guy going up to a Kegelbahn kiosk store where the clerk sits behind glass. The clerk is trying to get a sumo wrestling show to come in clearer on a TV in the kiosk. The customer is listening to music (the song Down) on headphones while he watches the clerk prepare his food, which includes rolling dough into a ball. He envisions the sumo wrestlers powdering their stomachs like pizza dough, then playing ping pong by hitting the ball of dough with their massive stomachs. As the food prep proceeds and moves onto the drink, the customer envisions the wrestlers continuing their ping pong game submerged in dark water (soda?). When its all over, the customer rubs his eyes and smiles as his food is handed over to him. The clip ends with the food being jammed straight into the screen, looking like the customer has been served the ball of dough the wrestlers were playing with.