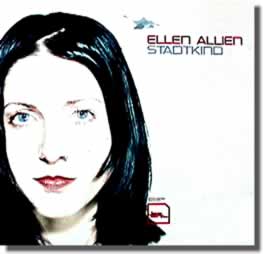 Ellen Allien seems to catch hold of everyone who hears her. Ellen Fraatz is a Berlin techno artist who owns and operates the label Bpitch Control, plus records as Ellen Allien.

Her first release was the Vodka 12inch, followed by the Last Kiss '99 12inch, the Dataromance 10inch and it's sister 12inch remix EP. She collaborated with Heiko Lauz on the song 'Liebestater' for the Berlin 2000 compilation, and contributed 'Sweet,' my favorite song on the Berlin 2001 compilation. Most recently she released the Erdbeermund 12.'

Everything I mentioned came out on Bpitch control. Combine the number of cool 12inch releases and the fact that both sides of the Dataromance 10inch are on this record and you might see how this 2001 CD has slipped though the hands of the gullbuy until now.

I am very glad to bring this disc to your attention. Six of the eleven songs on this disc are faves of mine, and that is pretty good for this hard to please ear. Ellen Allien makes music that reminds me of what Y.T. might have made for music had she been a real person instead of the skateboard messenger character in Neal Stephensons' Snow Crash. As Y.T. was my favorite part of that book, I love the music of Ellen Allien.

Yeah, there are better artists around for this sound. Some of the stuff on Shitkatapult and other Bpitch Control artists like Smash TV have THE THING going. But Ellen Allien has an energy that makes her stuff stand on its own. 'Tief In Mir' sounds like it was recorded in vacuum for the ship's computer Hal (2001.)

Some of the magic is lost when you translate the lyrics. 'Stadtkind' becomes 'City Kid,' and many of the passages sound simple and obvious. But again, this is part of Ellen Allien's appeal. She obviously has the means (Bpitch Control releases look mega-sharp and big budget) but she is just a modern age DIY kid who is doing what others simple talk about.

'Funkenflug Der Traume' has her electronically altered voice in a song as sharp as my favorite Smash TV tracks.
'Send' and 'Dataromance' from the 10inch both sound great here.
'Wolken Ziemen' has a simple melody which stands out front and makes the track something even my bird could sing.
'Trust and...' reminds me of Kraftwerk's 'Robots' in one of its vocal passages. It also makes me think of the little known (but great) 'Numbers' CD by Bell on the UK label Satellite Records.

I can't wait for Ellen Allien's next CD, and I'm glad to have finally gotten to hear this one.