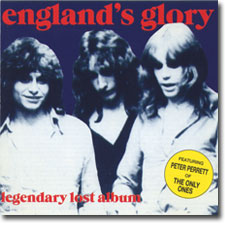 England's Glory was the band Peter Perrett fronted in 1973, before he formed The Only Ones.

In South London Peter Perrett, inspired by his love of Dylan, played an acoustic set at a youth club. Based on the burning passion he had, his wife Zena Kakoulli decided to form a band for him. She got her brother Harry (already a great bassist) and her friend Jon Newey (on drums) to join him.

England's Glory never went anywhere, despite having recorded a self-financed acetate (this record). Harry Kakoulli went on to play bass in Squeeze. Peter may have idolized Dylan, but his lifestyle was more like Johnny Thunders. This pretty much guaranteed that all his projects would never get the top billing they may have deserved.

The songs on Legendary Lost Album are pop songs built on a pre-punk guitar oriented structure. The recordings are rough studio tracks - they are the best the band could do with their budget, and they stand as a chronicle of a band that never saw its potential.

Peter writes very odd and interesting lyrics, like his idol Dylan. Check out this couplet from The Wide Waterway

I could even be an actor
its better than reading books.
I don't ever scream at her
I like the way she cooks.

Critics frequently dismiss Peter Perrett as a Lou reed clone. The Guest has music straight out of Sweet Jane, and Peter's voice IS a dead ringer for Lou on almost every track, but England's Glory are more of a guitar lovers band, as Only Ones were.

Legendary Lost Album is a record Only Ones fans will want to hear. A respected acquantance told me he thinks this record is the best work Peter Perrett ever did, but I don't agree. To me the Only Ones three albums remain pretty untouchable, with Legendary Lost Album an interesting footnote.

England's Glory in the gullbuy:

The First and Last