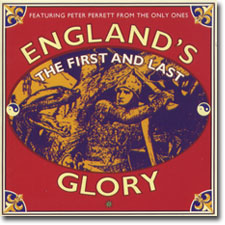 England's Glory was Peter Perrett's band in 1973, before he formed The Only Ones. All they ever released was a self-financed LP that they put out 40 copies of themselves.

The First And Last compiles two tapes that have never been heard till now. This record completes all known recordings of the band, an exploration started by Anagram with their 1987 LP and 1994 CD The Legendary Lost Album, which contained the self-financed LP.

The first four tracks comprise the demo that England's Glory did for EMI. They are the best recordings ever of the band, and the only place the song Bells That Chime ever appeared.

The remaining nine tracks are demos that the band recorded before their self-financed album. These tracks are only of interest as historical documents, though the early recording of Inbetweens, which would later show up on the second Only Ones album, is somewhat interesting.

England's Glory in the gullbuy: