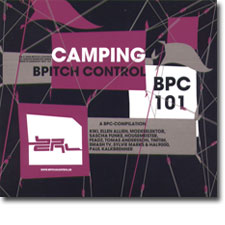 Bpitch control has been around since 1997 as an independent purveyor of up and coming avant-euro-techno/disco-pop (If I may be so bold to categorize their sound). The label was started by Ellen Allien who also releases and produces music for the label. Rooted in Berlin where they not only produce and merchandise, they have created their own party scene to generate an identity with Berlin and a marketing niche. BPC also takes pride in their graphic image and design from the CDs to the web. Not just a label but a life-style, their independence and collective credo are laudable and seems to resonate with music lovers and musicians beyond the walls of Berlin discos and music stores.

With that being said, I am not a huge fan of the techno-pop. One can't help the inevitable comparison to Kraftwerk and the cold tradition of German electronic music. And there is the parodistic Deter and "Schprockets" skits from the US television show SNL. I can only assume that these comparisons are a blessing and a curse. I do get a feeling of it being a clique/collective. If you like guitars and real drums can one be accepted in the party? Will you be "Allien-ated" and a forced to be a wallflower at the party? Are they too cool for their own good? Is it great music or a marketing ploy? Let's take a trip into this comp and really see.

Camping, from what I can assume, is a "comp" from a BPC tour. Most music on "das comp" was released between 2002 and 2004. I come to this conclusion from the way the insert lists dates and bands and doubles as a poster. The packaging design seems to be less attentive then other Bpitch releases I have seen and there is little info to delve into. There is a cool fold-out mini-poster with a collage made from the insert graphics from the first 100 BPC releases.

The opening instrumental track Luv Sick by Kiki has the ubiquitous "disco-throb" beat and a controlled white noise percussion like maracas. An electric tapping repeats like a Morse code afro-percussion. Electronic strings that seem sampled from outside sources or could be sampled from their own production. There is a harp-ish strum quality. Robotic and repetitive keyboards keep the progression going. I can hear it at the disco, backing a video, soundtracking a film or to funky ascension to heaven's gates. Kiki has one other track and also teams up with Silversurfer later on the recordings. The co-conspired WASP puts you the mind of a insect and flight. Disco-y and industrial. Now vee dahn-ce. Kiki's second offering throws around manufactured sounds tailored disco speakers and lights. Big, beating, computer blipping, echoing and nondescript "vocals", now "vee ah ree-lee dahn-sing".

Track two, We Electric, is by Sylvie Marks and Hal 9000 (obvious relation to 2001's computer) is prime for "podcasting" and Ipod speaker systems. With its tin treble and big bass, lacking mid-range it will go from club to Ipod flawlessly. The sultry female vocals and production harken to a discoish remix of the Gilbert/Lewis (Formerly of Wire) pet project AC Marias. Again, heartbeat electronic rhythm with keyboard electronics leading the path. Marks and Hal's second contribution on this "comp" (Track 6) is similar in its vocal style but adds an nice acoustical guitar sample and has a less disco feel. It also adds far more layers of keyboards and percussions. All adding to more to sink your ears into. Third on this recording is Paul Kalkbrenner, it seems like a variation on the Marks track that precedes. Cold, highly disco-techie and repetitive. It has some interesting sound bridges but I can't tell what separates it from what has come before.

Ellen Allien's- Wish is more a diverse and intrinsic experience. Her vocals have a slight electronic manipulation and a machine gun electronic percussion combine to give aural intrigue. The classical guitar picking that runs through it mixing with Ellen's own voice as the back up choir adds depth. It is far less repetitive and more "organic" then one expects from electric music and makes it stand out. Being that this is her label, can I infer that her sound is the foundation of BPC? Two other selections by Allien are in the mix. Sehnsucht starts with a tribal beat and sampled vocals that repeat from keyboards. It is stark and airy with twitchy, nervy electronic firings of a drug "come down". Although pure electronics it has more warmth than most other cuts. Stadtkind, with its megaphone announcement German vocals and circling beat makes me think I am either on my way dictated rave or 1984 modeled work complex.

Modeselektor's Don't Panic is a compliment to Allien's first appearance that comes before. With fast and skittish, random bursts, think insects on speed talking in a secret language, it is contrasted by a pretty and soaring background. It borders on the annoying and the beautiful. The contrast works for the experimentally attuned ear.

Sashe Funke takes the 7th position and does nothing for me. With German accented vocals it makes me think of dated industrial music. The "music" is cold. There is really nothing to grasp on to here. Housemeister, parodies itself and German cultural stereotypes. I skipped it. Tim Tim has a more static-laced sound. Clanging compu-cymbals and industrial beat it takes a pretty turn then comes to a machine "konk out" ending. Feadz is like Throbbing Gristle disco, The Normal but in a mock-ish way. I "vant" it to stop, Schnell!

Smash TV's Sad stand's out for its lack of boom beat and taking a slow, rainy mood that works with the cold electronic effects and female vocal manipulations. Sadness is evoked like in the 80's song, Walking In The Rain by Flash and the Pan (aptly named). Smash's other song, What About Me is like any other on the CD. Electronic and icy with neat little sound plays but like Sascha Funke, who recovers from their earlier entry with, When Will I Be Famous. These tracks stand out. Containing all the electronic cliches this label soaks itself in, Famous has a true pop song structure and the intoxicating vocal repetition "When will I be famous" hooks you. This is the hit off the compilation. What About Me? Is like Daft Punk. Poppy, robotic and dance floor-ready. Tim Tim ends the CD with another approachable stand-out. This is what electronic music should be. Warm, acoustic representation electronics. It is a sweet little number that defies its predecessors through emotive non-altered vocals and blurring lines between played and sampled guitars and banjoes. I really enjoyed it and glad this is where the trip ends, touching wood rather than steel.

What holds this compilation back for me is how tiring it gets. I can't tell one band from the other. It all seems like electronic tricks and chicanery. I need a parka! This "music" leaves me cold. I find enjoying it hard, listening to one track after the other. Perhaps more effective in its natural habitat, the disco floor, I don't find it enjoyable listening. Is it age or that I am not a digitally weaned, Ipod wired, tech-youth, programmer type? Is it an aversion to cold steely sounds as opposed to warmth and range of emotion. Maybe it is simply that much of the tracks contain that disco beat that irritates me from my wall shared with my neighbor? There needs to be something natural about it. I don't want to celebrate coldness and hardness. Has science fiction taught us nothing? We are supposed to fight the robots, not become them.