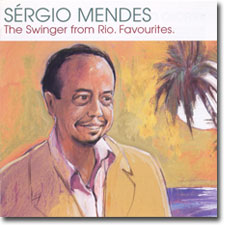 There is little for me to say except "buy this if you like Sergio Mendes & Brasil 66." I offer this recommendation with no reservations. Even if you own many of his LPs, this collection is mastered wonderfully and has an interesting track sequence that is quite enjoyable.

The 24 songs on this 73 minute disc bridge all periods of this man's awesome career, and the liner notes, though short, taught me a lot I never knew about him. For one, I never realized that he doesn't write any of the songs. That was a surprise. But the songs were all written by the cream of Brazilian musicians, and the execution of cover songs is so pristine that on many of these songs, Sergio Mendes versions have become the gold standard.

At 16 Sergio Mendes was leading a jazz band in Brazil. He was an integral player in the Bossa Nova scene, and recorded with lots of artists including Antonio Carlos Jobim (who wrote many of the songs he covers). He came to the US after a telegram he received got him in trouble with the Brazilian government, who though he was a subverssive.

In the US he was discovered by Herp Alpert, whose label A&M (Herp Alpert and Jerry Moss) signed him. He formed Brasil 66 with an ace band and two lead female vocalists, Lani Hall and Janis Hanse. Lani soon became Mrs. Herp Alpert, though her incredible voice and stylings would have guaranteed her fame without his name.

The jazzy instrumental Ela É Carioca was written by Vinicius de Moraes and Antonio Carlos Jobim. It is followed by another Jobim jazz instrumental, Desafinada, co-written by Newton Mendonca. Both songs were written in 1974. Other jazz instrumentals on the disc are the Jobim/Louis Aloysio De Oliveira tracks Só Tinha de Ser Com Vocé and Outra Vez and Bebeto's Tristeza de Nós Dois.

Brasil 66 wove aural gold on tracks like Wave, One Note Samba/Spanish Flea, Night and Day, and The Fool On The Hill.

Further Brasil 66 vocal magic can be heard on the 1969 Alan and Marylin Bergman tracks Pretty World and Look Around, the Michel LeGrand song Watch What Happens, covered from the film Umbrellas of Cherbourg, the Dori Caymmi track Like A Lover, The Frog by Joao Donato, the Joao Gilberto penned Bim Bom, and Vinicius de Moraes/Antonio Carlos Jobim Só Danço Samba.

Some listeners may not enjoy his 80s work, such as Puzzle of Hearts or the blockbuster prom-standard hit (his biggest ever) Never Gonna Let You Go, but even that track has its charms if you just let it have its way.

Truly, there are few records appearing in the gullbuy that are more worthy of your hard earned cash and precious time.