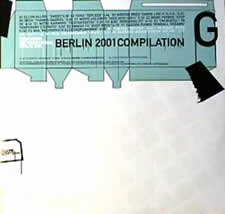 TokTok start off Side G with Sekker. All I had ever heard from them before was their TokTok vs. Soffy O. 12' on Bpitch Control. I LOVED that 12', but Sekker is just OK. It is an instrumental that does not have a whole lot in the way of identity.

EEDIO follow with Mode On Static. A Moroder-esque beat with a female vocal saying 'more I see' start off the cut. After the vocal stops the track calms down, then starts pulsing up for another go. Mode On Static has the same type of appeal as White Dolemite and Mitte Karaoke on the first 12' in this set. I like this song and cannot easily tell you why.

On the H side Paul Kalkbrenner starts off with Meute. I have wanted to hear his stuff for some time. I have looked at his Bpitch Control full length but have not picked it up. Meute uses a tremolo effect that reminds me of an accordion through a Leslie (the speaker cabinet with a rotating speaker, which organ players use to great effect). Meute is not anything spectacular to me.

The final cut in this four 12' series is Barbara Morgenstern's Dr. Mr.. It is an instrumental that uses violins and cellos along with electronics in a smooth relaxing way. It is my favorite track on this volume along with the EEDIO cut.

the other three Berlin 2001 12inch singles in the gullbuy: