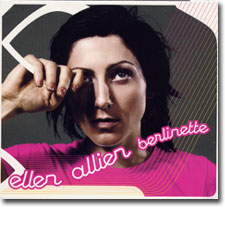 'Berlinette' is the second full length from Berlin electronic music artist Ellen Allien, following up the 2000 CD 'Stadkind.' Two records in three years might be enough for many artists. However, I left out the fact that Ellen Allien has, in that same three years, released four mix CDs and many 12inch singles. Oh, and I also forgot to say that she runs Bpitch Control, a label that has come straight to the forefront of the underground music scene in the former East Berlin. Yes, Ellen Allien must be a busy gal! 'Berlinette' was produced by Ellen and Smash TV's H. Zilske. You can hear a bit of the Smash TV sound on this record.

This record has taken me a long time to absorb. initially, I expected one thing, and it was not that thing (a disc of songs like Sweet and Erbeermund). But I have come to really like this disc, especially the sound she gets on Sensuckt and at the end of Open, and the chances she takes on the tracks like Augenblick and Wish.