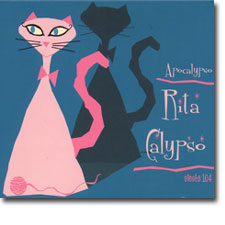 Rita Calypso has released a wonderful debut album with her Apocalypso album on Siesta Records. Very much like the Smokey and Miho Tempo de Amor: Songs By Baden Powell ep from 2002, Apocalypso mines the rich tradition of songwriting, but instead of sticking to one or two songwriters, Rita Calypso digs through a vast and rich tradition of many songwriters, delving into the vaults of the 1960s for what has become a peak of and a peak at creativity in that decade of the 20th century. What we end up with is an album that St Etienne's Sarah Cracknell or Miho would die to call their own, an album that only gets richer in texture and depth with more and more listens. Music inspired by the gentle people and for the rich minded folk.

Apocalypso is full of great tunes like Claudine Longet's Wanderlove, Bacharach & David's Paper Mache, Charles Fox's (composer of the Happy Days theme, plus many other TV shows) Where Do I Go? (which sounds like a tv theme song I cannot place), Nancy Sinatra's Kinky Love, Ellen Dedrick's (of The Free Design) Settlement Boy (the original has just been reissued as a bonus track on The Free Design's Heaven/Earth), Lee Hazlewood's Sugartown (originally done by Nancy Sinatra), Jimmy Webb's I'll Cry Myself To Sleep, Linda Ball's The End (the original was written by Ian Whitcomb and arranged by Roger Nichols), Tim Hardin's Misty Roses (covered by everyone from Astrud Gilberto to Colin Blunstone), and Mason William's Never Was A Love Like Mine. Also included are some choice instrumentals: versions of Bruno Nicolai's Mary, Tony Hatch's Birds, and The Brass Ring's The Disadvantages Of You which add a lounge heaven soundtrack bliss to the proceedings.

Highlights for me start with Kinky Love. This song was on repeat mode for the past couple of weeks. It sounds so much like a Sarah Cracknell solo song, it's uncanny. I must've heard the Pale Saints version of this song from 1990, because this song sounded so damn familiar (it was released on a Pale Saints ep single). The lyrics are damn fine written by Dave Ellingson (written for Nancy Sinatra who recorded a version in 1976, but I'm pretty sure I've never heard it) and saying things like "kinky - take me inside and let the honey slide." I bet Sarah C is kicking herself for not thinking of covering it.

I was just debating the idea of checking out the Free Design reissues before writing this review. Hearing Rita's version of Ellen Dedrick's (of The Free Design) Settlement Boy, makes that debate all the more current and now. there are certain songwriters whose melodies and songs are timeless, even ahead of their time. Members of The Free Design and people like Judee Sill spring immediately to mind. Many people, luckily have latched onto the likes of The Free Design's goodness, and the jury is still out on Judee Sill's re-emergence in popularity, so get this Ellen Dedrick song while it's hot.

I was really excited to hear a modern interpretation of the classic song The End by Linda Ball. Honestly, I didn't know a thing about her (still don't really) but I knew I loved this song from a download I did a couple of years ago (first time I ever heard Margo Guryan and The Gentle Touch, which gives you a clue about how crucial those downloads were). Looking further into Miss Ball's little tune led me to the names Ian Whitcomb and Roger Nichols, which helps to paint a picture of why this song is so unique. What's fascinating is that Rita doesn't stray far from the original arrangement but somehow modernizes it in the same way that Smokey and Miho did to the songs of Baden Powell and Vinícius de Moraes.

Rita's version of the The Brass Ring's The Disadvantages Of You (the original of which was used in a Benson and Hedges cigarette commercial) is another delightful instrumental interlude of a moment - dappled with female background "la la las" which add just the right playfulness.

The only songs I was not amazed by were Rita's versions of Jimmy Webb's I'll Cry Myself To Sleep and Mason William's Never Was A Love Like Mine. I've never been too keen on Jimmy Webb, but this song seemed to hold a promise not wholly held up by Rita. The Mason William song which ends the album didn't really do it for me either.