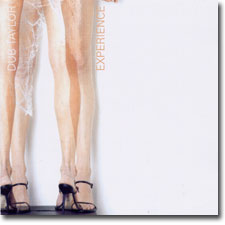 Dub Taylor (aka Alex Kruger) follows up his debut album Detect from 2001 in fine, exquisite, classy style, with his latest offering on Forcetracks entitled Experience. Pulling together a set of tracks that are so hot and pulsing with the beat of dub house, Dub Taylor's new album is like the artwork that accompanies it: sleek, seemingly bare, but with unexpected hidden depths and nuances. Best heard loud (I suppose best heard loud in a club setting with a group of your finest friends) and while moving (which means a car would be the next best place to listen to Dub Taylor) Experience is not the same experience when the volume is turned down.

Dub Taylor divides his albums up with vocal and instrumental tracks, but even the so-called instrumental tracks have vocal flourishes in the form of robotic voices or cut-ups. One is immediately drawn first and foremost to the vocal tracks with guest vocalists. This time around Dub Taylor is helped out by Nadine on Sweet Awakening, Renya on Ko-Hi-Nomitai (both highlights of the disc) and Vital (aka 16 year old Sandra Lotzsh) on Your Soul (which is a great house track but somewhat commercial sounding for my tastes).

Nadine sounds like Kate Bush on Sweet Awakening in her crisp, clear style, as Dub Taylor's bouncing, minimal rhythms resolve themselves behind her vocals. I think however, my favorite vocal track is Ko-Hi-Nomitai with Renya on vocals, which combines Japanese sounds with an almost Afro influenced rhythm with intriguing results.

Of the instrumental tracks I found myself drawn to the last two tracks the most. Flop (Recorded Live) has just that: a hyper live sound which reminds me of the Live @ Weetamix cd by Luciano. Flop is a little more straight forward, but has the added bonus of a looped Germanic voice repeating "I raise my hand to the top...and flop!" Clash! is another great instrumental, which starts out minimal and subdued but soon picks up steam as piles of rhythm boxes and bass melodies bounce around and syncopate with the chirpings and warbles of computerized insect sounds.

Dub Taylor in the gullbuy: