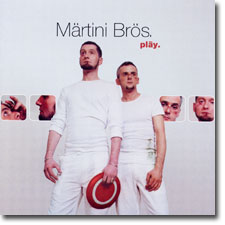 Clé and Mike Vamp are Berlin's Märtini Brös. 'Play' is their first full length. Even though this record came out in 2002, not many people have discovered it yet.

One of the CDs tracks, The Biggest Fan, appeared on Tiga's DJ Kicks collection. Another, Dance Like It Is O.K., was on the Bpitch Control 'Berlin 2001 Compilation.'

Despite these high visibility appearances, Martini Bros. remain slightly below the radar of their potential fanbase. Steve Bug's Poker Flat Recordings label became the home of 'Play,' joining Hakan Lidbo and Steve Bug himself on the label's roster. Poker Flat is a label that has put out good, but not stunning, records. Poker Flat has never enjoyed the A-list popularity given to labels like Bpitch Control, Gigolo, or Shitkatapult.

'Play' has eleven songs, nine new ones if you take away the ones we know already from comp appearances. I really like three of those nine remaining tracks.

About those three: The record starts off with Boy/Girl. It is an 11:30 track that doesn't hang around too long despite its long length. The track should really be called Disco Boy, Disco Girl, as that is the lyric. The music is strong and clear. This is my favorite cut on the disc.

L.O.V.E. (A Really Strong Emotion) is not a cover of the Orange Juice track L.O.V.E. To music with a dripping synth part out of Trio's Da Da Da, spoken dialog about what love is from a man and a women appears over a fat bass part like Headman or Playgroup would feature.

Flash is a vocal track with a good melody and toe tapping beat. Flash struts the same musical territory as Borneo & Sporenberg or Closer Musik.

Next are the songs that have already appeared on comps. Dance Like It Is O.K. is a masterful song, kind of like the timeless Whirlpool Production track From Disco to Disco, which (besides being on the hard to find Whirlpool Production CD) first appeared on the Bungalow Records comp 'Ro 3003' back in 1997, and most recently appeared last month on the CD 'A Bugged Out Mix by Felix Da Housecat.' Considering the short shelf life of modern dancepop, THAT is timeless! The history timeline of Dance Like It Is O.K. might not spread back that far, but I have a feeling it will be remembered as the signature song of Martini Bros. Like Flash, it has a Borneo& Sporenberg or Closer Music feel. the verses are sung in German, the chorus in English. The melody, production, construction, and finished package are quite fine.

The song used by Tiga, The Biggest Fan, sounds almost exactly like a New Order song - even more than Gerhard Potuznick's G.D. Luxxe project. Vocals on The Biggest Fan have Bernard Sumner pegged to the tee. You've really got to hear it!

Three of the remaining tracks are basically instrumentals. Each have short vocal sections. These tracks, Electric Monk, Ultrastar, and Hot are good cuts that I enjoy, though they do not entice me the way my three faves do. There are three vocal tracks that remind me of the Brad Laner band Medicine back when Beth did vocals. These tracks could appeal to a whole different set of people than the rest of the tracks, but chances are they will not be discovered by this group of people, buried as they are on this CD.

Happiness is my fave of the three, with dual tracked vocals and a beat that moves. Audiopark 2002 has a more sluggish sound and is basically an instrumental. Flowers of July has a britpop psychedelic feel.

I like Martini Bros. I think that they deserve to be heard by a lot more folk. I hope you check them out when you have a chance.

Poker Flat Recordings in the gullbuy: