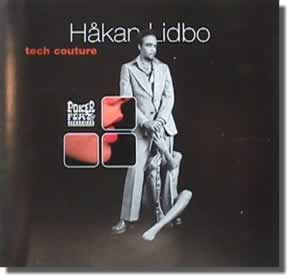 Håkan Lidbo is an artist from Stockholm Sweden who has released over 120 records in his career. Many of these were 12inch singles. He has recorded for a lot of different labels.

From that point on I became curious about Håkan Lidbo, especially as I discovered how much material he had released, and how varied his sounds were. I discovered that he recorded an abstract electronic full length for Denmark's April Records, a minimal artsy full length for Mikael Stavostrand's French label Mitek Records, and a tech-house record for Poker Flat Recordings.

Tech Couture is an instrumental record that sometimes sounds similar to Antonelli Electr. I have enjoyed Tech Couture this summer, and found it to be a very immediate introduction to Håkan Lidbo's work. This full length follows three 12inch singles he released on Poker Flat. Televinken, Meta-Matic, and Kiki de Montparnasse were the titles. I have never actually seen these records, so I can only tell you for sure that one track from them is on Tech Couture. Kiki de Montparnasse has a straight 4/4 beat, an occasional echo effect, and a great title, but is not as distinctive as I would have hoped.

One of my favorite tracks is the short (1:34) opening cut Intro (Multifunctional). Intro (Multifunctional) has the whirs of machines and an attractive sound throughout. I also like Telepaths. Telepaths is not as straight cut as Kiki de Montparnasse. It grows and changes, and has breaks in it. Rochelle Rochelle is the moodiest track on Tech Couture, and also one of my faves. Rochelle Rochelle has a sound which reminds me of a camera shutter clicking. It also has a strong percussive part, and a gliding synth floating above the rest of the track. The last of my faves is The Kinsey Report. The Kinsey Report has skittering sounds like musical drops of water. the track has a quick beat, and an interesting sound that makes you listen close.

Many of the other tracks have little variation from start to end, and are truly minimal tech-house in every sense of the word. On these tracks, your musical taste will be the dividing line on whether you like them or not. All the tracks are well done.

For me, I like the more dynamic cuts which I detailed above, though I can have Tech Couture on in the background anytime without needing to get up and flip past an annoying track. If you like records on Kompakt, Trapez, or Italic, you would do well to check out this record.