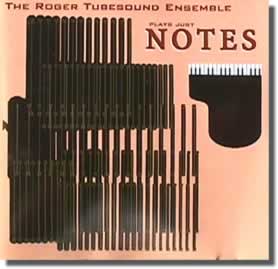 The Roger Tubesound Ensemble is another alias of Uwe Schmidt, the prolific German expatriate living in Santiago Chile.

On this project he uses jazz samples exclusively for the construction. Brushed drums, percussion, vibraphone, killer kat upright bass parts, electric keys, and piano are woven into cut 'n paste constructs that never would have crossed the mind of even the most daring jazz musician.

Even though the source material is strictly jazz, the end result is sequenced into impossible transitions. There is no attempt to make the music sound natural. Looped parts are allowed to sound looped.

There are five songs on The Roger Tubesound Ensemble: Plays Just Notes. The CD starts out with Roger's Back. This seven minute tune starts off with male voices saying 'Roger's back' answered by a female 'Yeah.' The song is fairly straightforward, and would fit well with music by the 60s/70s vibraphone master Dave Pike and his band The Dave Pike Set. Parts of the song sound tweaked, but in general Roger's Back just sounds like a crazy keyboards' twinkling tune.

The second track is Dear Lost Listener. Clocking in at 5:50, Dear Lost Listener is one of my favorite tracks on the CD. The extreme sample manipulation that Uwe Schmidt is famous for in his many projects (Atom Heart, Atom & Tea Time, LB, Senor Coconut, Midisport, Los Sampler's, Flanger) can all be heard in Dear Lost Listener. The track alternates between a lonesome piano track and a swirling fiesta of frenetic beats and wild solos.

Music (For the Library of God) delivers all the way through. There is a voice sample saying 'music' that serves as the hook for the 6:22 song. Music (For the Library of God) starts off with piano sounding as scattershot as the piano in David Bowie's song Aladdin Sane. The track picks up with a trap beat accented by the 'music' vocal. This is the first time on Plays Just Notes that Uwe Schmidt lets the curtain drop completely. The cannot-be-made-by-man super quick sounds dance around the piano and the 'music' voice. Just before the end of the song the pace slows, bringing the song to a quiet conclusion which sets the pace for the next track.

Interchangeable Intervals is a quiet track with a dark polynesian jungle feel and some jazzy male vocals saying 'interchangeable.' There is freeform percussion and loose structure throughout. I like this track. It sounds like 23 Skidoo in their gamelan stage crossed with Les Baxter's Quiet Village.

The final track on the CD is ...And Plays Just Notes. It is a 19:11 track that is engaging all the way through. After the song ends the CD continues for 5 minutes before ending with a 4 second music and voice sample saying 'end.' This is a satisfying record. I'm glad it was made!