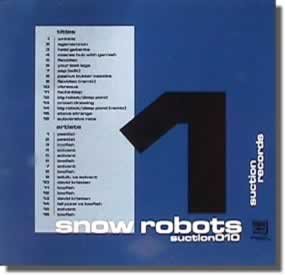 Suction Records is an electro label from Canada that has put out records by two Canadian artists, Solvent and Lowfish.

Additionally, there are two tracks by Montreal artist David Kristian and two by Pest(e). Pest(e) is another identity of Toronto artist Gregory de Rocher (Lowfish). Solvent is Jason Amm, also from Toronto.

The Adult. remix of Solvent's Flexidisc is my favorite track on the comp. The distinctive voice Of Nicola Kuperus and the dry synth of Adam Equation accent the robotic feel Flexidisc had to begin with. The Lali Puna remix of Big Robot/Deep Pond by Lowfish is my second favorite. As usual, the voice of Valerie Trebeljahr adds magic to the track. These are the only tracks that have vocals on them.

Though I remember enjoying his releases on the Slumberland Record subsidiary Dropbeat, the two David Kristian tracks are my least favorite cuts on the CD. I found myself hitting the next button every time I listened to the CD and they came on, and only made the connection that both of these 'hit next' tracks were his when I sat down to write this review. Both of the tracks sounded leaden and oppressive to me.

In the profiles section of Suction Records Web site they mention underground electronica robot music. This CD was released in 2001, and most of the tracks fit this description well. While electronica is currently out of vogue, the synth-pop leanings of many of these tracks keep them from seeming out of place as we enter 2003.