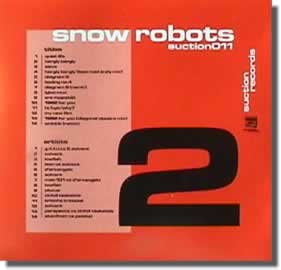 Snow Robots 2 has more tracks that I like than Snow Robots 1. Again, Toronto artists Solvent (Jason Amm) and Lowfish (Gregory de Rocher) appear on several tracks. But this time there are more interpretations by other artists.

Vienna artist Gerhard Potuznick has been recording as GD Luxxe for several labels including Austria's Cheap Entertainment. He opens up this disc with a version of Solvent's Quiet Life. Quiet Life is given a vocal treatment, and the result is a pretty good new wave styled electronic track.

ISAN slow down and spread out Solvent's track Hergly Bergly on their 'less mad Andy mix.' Snow Robots 2 has two artists from Italy. D'Arcangelo perform Diagram 9, and Mat 101 (who also record as Jolly Music) do a mix of the track as well.

Pluxus are a band from Sweden. Pluxus have a song I like called Ers Majestät on Snow Robots 2. It has a sound like a rubber ducky being squeezed. Ers Majestat is one of my three favorite tracks on the disc.

The other two tracks I like best are a track each by Lowfish and Solvent. Solvent's Hergly Bergly feels loose and natural, and it has a cool electronic sound that ISAN remove entirely in their remix. Igloo Mux by Lowfish is the last of my faves. Igloo Mux moves with a quick pace and has the same type of electronic beat that The Normal used on their classics Warm Leatherette and TVOD.

Brioche Kretzaal is Brain Flanagan from Manchester, England. The Brioche Kretzaal track hi/bye/why? is pretty good. It has a lo fi sound, what we used to call 'bedroom electronica.' But it has as much in common with Silicon Teens as it does with electronica. There is a steady beat that drives the song nicely.

With more artists and more variety to choose from, I like Snow Robots 2 better than Snow Robots 1, though I REALLY like the Adult. and Lali Puna remixes on the first volume. I guess if you like one of these discs, you will want to have the other.