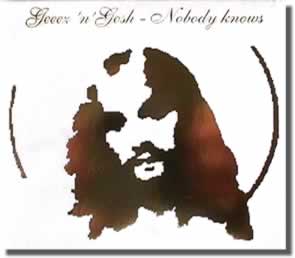 Uwe Schmidt is back with his second full length as Geeez 'n' Gosh. Nobody Knows is the follow-up to My Life with Jesus, which was also released on Mille Plateaux.

As Uwe's music is completely technology based, this record sounds more cut up and scattershot than the last, as his knowledge of sample manipulation has grown.

I like this record, just as I like many of his other projects. Uwe Schmidt is Atom Heart, Atom™, Senor Coconut, The Roger Tubesound Ensemble, Midisport, Los Sampler's, Flanger (with Burnt Friedman), and many other names I am not coming up with at the moment.

Some parts of this record are just too much - they are not linear enough for normal listening. Other tracks like Pray, Mother showed Me (the way to go), or I'm Determined (Jesus changed my soul) are very listenable, and have the same type of juxtaposition of traditional and futuristic that made the songs on the accordion/medodica comp Asthmatic Worm work so well. The samples Uwe uses would be right at home on a Trikont gospel compilation, but the digital construction of the tracks is just like nothing on earth (to quote a lyric by The Stranglers).

The idea of digital silence between notes of a hopping moving song is something I first heard on the song 'I Love You' by J-pop band Hi-Posi. Geeez n' Gosh take the same idea to the extreme and have crafted a whole record out of completely artificial constructs.

If you watched an oscilloscope while playing this record there would be no sine waves. The tones stop and go so abruptly that Nobody Knows would look like a histogram on an oscilloscope This whole project reminds me of one of my favorite current authors, John Sundman. His two books - Acts of the Apostles, and Cheap Complex Devices - both featured Jesus on the cover, yet both had little or nothing to do with religion or the man himself. Likewise, Geeez 'n' Gosh uses samples of gospel recordings simply as source material for the artificial construct which Nobody Knows excels at being.

Geeez 'n' Gosh in the gullbuy:

My Life With Jesus