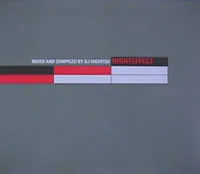 WMF is an electronic music club in Berlin. As a label WMF have released five CDs so far, none a clunker. These have included the 'komfort.labor' series.

The first WMF release has been my favorite. It was put together by the same person who did this CD, and even has the same name as this disc. The new 'Nighteffect' has more of an instrumental feel than the original one, though the quality level is strong strong strong.

Mitte Karaoke are the one name I recognize from the original 'Nighteffect'. A few of the artists are already big names from other new underground labels.

T. Raumschmiere (aka Marco Haas, the fellow who runs the label Shitkatapult) contributed an unreleased track called 'Ravemusick' (#13) which is my favorite track on the disc (though I really like the whole CD).

Two artists (Martini Bros, Sascha Funke) who also have releases the hot label Bpitch Control. Both are prolific artists with releases on many labels under their belt. The Martini Bros song has vocals and a sound that reminds me of Soft Cell a bit. The Sascha Funke track is an instrumental with a big sound and a 4/4 beat.

David Carretta (who records for Munich's International Deejay Gigolo Records) has an unreleased track call 'Tu Es' (#14) with a woman named Cassy singing. I have always loved his collaborations with vocalists. On his 'Le Catalogue Electronique' CD there is a track called 'Le Cauchemar' with Chicks On Speed singing which remains a little known Chicks On Speed classic.

There is a Polish artist on this disc that I am curious to hear more of. Jacek Sienkievicz's 'This Night With The Eagle' (#9) is a tekhouse instrumental with a commanding sound.

While the first 'Nighteffect' CD was more like Flittchen Record's 'F**ky Don't' compilation (very song oriented electropop), the new 'Nighteffect' has a dancefloor feel, reflecting the current interest in the underground tech-house.

If you are hesitant of listening to ANY derivative of 'house', check out the T. Raumschmeirre cut and tell me it wouldn't clear your average urban eurotrash off the dancefloor in a jif. This music is tough stuff.

other WMF comps in the gullbuy: