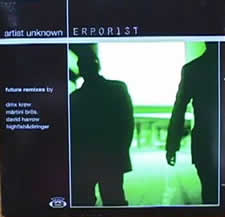 Artist Unknown are a duo from Berlin. On this 5 song EP they have one new song (Errorist) and four remixes of separate songs. The whole thing sits very well as a package, and the 5 songs are quite good.

'Errorist' has vocals that sound almost exactly like John Lydon in PIL. The music is even like a more electronic PIL. The cut is pretty great.

DMX Krew remix 'Anthem'. This is the first new DMX Krew track I've seen in a while. The track has vocals that sound like Peter Murphy in Bauhaus. In all 'Anthem' reminds me of the Church Of Carbon (Patrick Pulsinger and Gerhard Potuznik) Bauhaus cover 12' - and THAT is a good thing!

On the Martini Bros. Remix of 'Control' Mellissa of Chicks On Speed does vocals. It is a cello based track that seems to tell the tale of someone losing their will to drugs. A high powered Rasputina with guts instead of goth.

David Harrow's remix of 'Anthem' completely negates the Peter Murphy feel of the DMX Krew mix my adding electro effect to the voice and bringing the moroder factor higher for the synth. It is my least fave of the cuts.

Highfish & Diringer's remix of 'The Hole/Das Loch' finishes off the EP. DJ Highfish is the guy who compiled the two 'Nighteffect' CDs on Berlin's WMF Records. I loved both those discs and love this cut as well. The synth sound on it is sick!

This EP surprised me a lot. I only bought it because I noticed the Chicks On Speed connection. I came to love all the cuts but one.