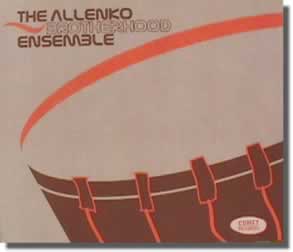 'Future Afrobeat! Tony Allen's beat revisited by' reads the sticker on the cover of this CD. The Allenko Brotherhood Ensemble is a sweet CD I never would have heard had it not been marked down considerably at the store.

The Allenko Brotherhood Ensemble is not a band, but the name given to this group of artists who have recorded recent collaborations with Tony Allen. Tony Allen was the drummer for Afrobeat legend Fela Kuti. Tony Allen moved to Europe decades ago and has collaborated with many musicians since, spreading the percussive funky sounds of Afrobeat to Europeans and people of taste all over the world.

Comet Records is a label from France which have been releasing many Afrobeat CDs. The sleeve of this disc proclaims 'all the tracks included in this album are exclusive mixes based on original afrobeat drum patterns by Tony Allen.'

Some familiar names appear on the disc (Cinematic Orchestra, Boozoo Bajou), though my favorite tracks are by artists I had never heard before.

The standout track is 'Right Here In Front Of You' by Unsung Heroes & Ty feat. Breis. It is a male vocal song with a message almost like Gil Scott Heron's 'The Revolution Will Not Be Televised.' Right Here In Front Of You is very catchy after a few listens. Initially it was not favored by me because the vocal is an almost rap styled tradeoff between Ty and Breis. Eventually I found myself hearing the song in my head during the day, and it became a fave.

Joakim Love 'Machine Sun Construction' has cool sounds and a great beat. It was the first song that jumped out at me, and I love it still. There is a didgeroo or something in it, and an electronic sound like a jet engine winding down. There are many additional percussive embellishes that add to the substance of the track as well. Even the touches of flute fit into the song perfectly, with all the cool percussion below.

Son of Scientists feat. Eska contributed 'The Drum.' The Drum is a funky female vocal track that reminds me of Tutto Matto or Los Chicharrons from the Tummy Touch label, or the Patrick Pulsinger remix of Sagittarius 3 on the Op:l Bastard 12inch.

'Rogallen' by Rogall uses click stick percussion, well placed echo effect on the music, and subtle vocals to create a very cool vibe that is funky and fresh.

There are 12 songs on this CD and none are poor. I like this CD a lot and am now curious to hear more stuff on this label.