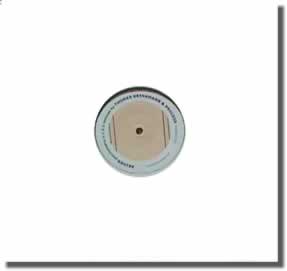 I really like the A side of this 12inch. It is killer, and worth buying this for. When Kompakt released the mix CD Michael Mayer presents Immer. Akufen's 'Psychometry' was one of my favorite tracks.

The two versions on this 12inch bear so little resemblance to the original that only a handful of people would have recognized the source had it not been pointed out.

Thomas Brinkmann pulls out magic for this one. Not only does he flash us with cool sounds, but he has voice snippets in the track that make it fly to the moon. Thomas Brinkmann found some kind of straight reading or ESL (English as Second Language) tape from which he extracts the quote 'What is new? Nothing in particular. Nothing much.'

With the clear enunciation of the voice on top of the steady beat and wild electronic sounds Thomas Brinkmann coaxes out of machines, the track is otherworldly in the best of ways. Is this Thomas Brinkmann's statement on the state of electronics? Or is it just clever misdirection to aid him in disorienting us.

I recognized the same race car sound he used on his Corvette 12inch in this mix. I really hope this track ends up on a compilation. I fear that this 12' is already hard to find. Trapez is an imprint label of Traum. The Web site informs us that Trapez 'was formed in 2001, as an alternative for the dancefloor.'

This 12inch is the fifteenth release on the label. Trapez CD1 is a compilation which just came out (the first CD on the label), but this cut is not on CD1.

Process is Stephen Barnes from Brighton in England. He is an artist who has tracks on Hefty's 'Immediate Action,' ~Scape's 'Steadtizism 2, plus stuff on Fat Cat and Traum. The Process remix percolates along with vigor, but has little variation. I do not like it as much as the Brinkmann mix, as there are no surprises to wait for after the song starts. On the positive side, it has a good groove which it carries through to the end of the track.