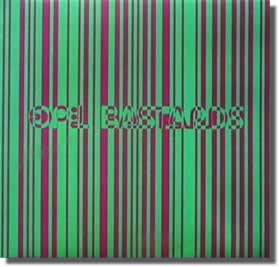 Sagittarius 3 is a single from the Op:l Bastards album The Job, which I have tried to find for a long time. In Christmas 2001 I saw it in Paris at Collette and passed on it due to the high price. I have never seen it since, and now I hear they have broken up, right after Warp was going to licence the record for UK release.

The gullbuy has previously reviewed Op:l Bastards 'Scorpius' EP. This 12inch contains four mixes of Sagittarius 3, including the the original mix from the album. the original mix is a seven minute instrumental with a strong bass part, retro synth sound and 70s disco effects.

The DJ Slow mix changes the feel a lot. The song is slowed downed and spread out. New rhythmic and percussive parts are added, along with a ghetto-tech vocal sample saying 'rock the house in.' For me the real fun starts when you flip the disc over and drop the needle down.

The Disko Flavour Remix by Patrick Pulsinger is my favorite version here. If you like the funky dancedrive sounds of Tummy Touch bands like Tutto Matto and Los Chicharrons you will love what Patrick Pulsinger did to Sagittarius 3. Patrick Pulsinger is one of the folks who run the (great) Austrian label Cheap Entertainment (Cheap, for short). Cheap has put out records for years that forecast a lot of the current sounds we are all digging. Patrick Pulsinger also contributed music to Chicks On Speed and Louis Austin.

The final remix is by Detroit Grand Pubahs. It is the least interesting of the mixes in my opinion. Detroit Grand Pubahs put the focus on a keyboard riff they added, and a little dub-like echo. There is nothing innately wrong with what they did, it is just that I like the more immediate sound of the other three mixes.