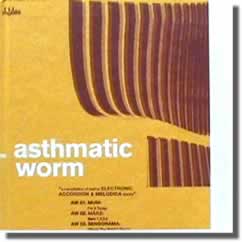 This summer when I saw Mùm I was blown away. I sent emails to friends placing all sorts of grand compliments to Mùm. One of the things I loved was the was they combined a homespun feel with modern electronics.

Asthmatic Worm collects twelve songs that all strive towards this end. The common thread is that all tracks are composed with electronic accordion and melodica (asthmatic worm is an old time nickname for an accordion).

Asthmatic Worm works as a whole, and has a calm mood throughout. Even Gonzales short contribution keeps the mood serene with the album closer 'Melodika.' True, only two of the twelve tracks are unreleased, but like all the best planned comps, the whole works better than the sum of the individual tracks.

I like many of the tracks. The Doctor Rockit song is very French sounding, with brushed drums and a weaving bass. It is ultimate café music.

'Sans Toi' by Hey sounds like Serge Gainsbourg on his 'Aux Armes et Caetera' reggae LP from 1979. But Hey fill the song with accordion and a tremolo guitar that both make the song very distinctive.

Gotan Project are a band I have always been curious about. I have never heard their CDs, yet always wanted to (still do). They used to be called Les Negresses Vertes. 'El Capitalismo Foraneo' is my favorite track on the comp. It has muffled voices below a gypsy sounding accordion and a percussive beat.

The packaging on both the CD and LP of Asthmatic Worm is very well done, and the whole package demands respect and repeated listening.