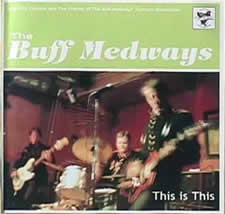 Hearing Billy Childish's post-Headcoats project The Buff Medways cover Jimi Hendrix on a seven inch two years ago seemed to me both blindly ambitious and quite arrogant.

Hendrix is after all, Hendrix. After hearing The Buff Medways first full length, This is This, the bold parallel that Childish still reaches for suddenly begins makes a lot amount of sense.

This is This provides another moment to ponder the disturbing amount of music that Childish has generated in all his varying outfits over the years. Yet remarkably evident on this album again is Childish's freakish guitar ingenuity, reverb drenched and vivid enough to make the best tracks sound like they're inventing the entire genre.

Considering how potentially limiting the three chord combos that construct Childish's punk injected rhythm and blues/garage palette, the sheer energy on This is This place him a bit closer to that guitar god mantle personified by Hendrix.

However tepid Childish's recent work has been, the wallop of tracks like No Mercy and the title track or dirtier, Kinksy numbers like Don't Give Up on Love pack an uncanny bite that seems wholly attributive to the primal energy that Childish can unleash from his guitar. Billy, meet Jimi.

In fact, the weakest songs on This is This simply borrow from Hendrix, be it the Gypsy Eyes beginning of This Won't Change, the bluesy Cross Lines eerie similarity to Crosstown Traffic or Till It Is Over, which on my count, veers from If 6 were 9 then into Manic Depression while the song's key riff eventually evolves into a sped up take on Fire.

It's when Childish tears into his roots that This is This becomes the most alive. Much more than snooty English sneer, the fury of This is This make it incredibly hard to date Billy Childish and The Buff Medways. Throughout this album, it sounds like it should have come first.

Til It Is Over 7inch

Tribute to The Daggermen 7inch