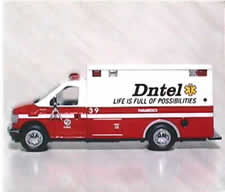 Dntel (pronounced 'dental') is LA electronica artist Jimmy Tamborello. Jimmy is also a amember of the band Figurine. 'Life Is Full Of Possibilities' is his third full length as Dntel.

There are a handful of guests making appearances on this disc, mostly as vocalists, some as guitar. Most of the CD is very peaceful and calm - not my thing since better days when The Wisdom Of Harry side projects State River Widening and Ellis Island Sound seemed so full of promise. Most of the tracks on this disc are pleasant enough- they just don't speak to me.

Of the guest appearances, my favorites are by artists I have never followed. Rachel Haden of That Dog makes Why I'm So Unhappy (#7) quite pleasant. It is a Portishead styled cut with a languid pace.

I have never listened to Death Cab For Cutie, the band who took their name from a Bonzo Dog Band song I love. Death Cab For Cutie's Benjamin Gibbard sings (This Is) The Dream of Evan and Chan (#9). It is the most upbeat song on the CD, with the vocal effect used by Cher and Daft Punk employed in an understated way.

Mia Doi Todd's song Anywhere Anyone (#2) is OK, but not as original as I would have hoped. Her song sounds a lot like Pram. The singing contribution of Jimmy's bandmate Meredith from Figurine is nothing special to me. Suddenly Is Sooner Than You Think (#5) sounds a bit like early Movietone, but not as groundbreaking or glorious.

Half of the 10 songs on 'Life Is Full Of Possibilities' are instrumentals. My favorite song on the disc is one of them. Last Songs (#10) has guitar by Paul Larson of Strictly Ballroom, but that is not the highlight (even though his guitar contributes greatly to the State River Widening and Ellis Island Sound comparisons I started this review with). What makes Last Songs so great is its sense of joy. It is not as sad as the rest of the tracks, and it speaks more to my world.