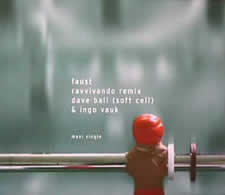 In the early 80's, David Ball was already in the late 90's with what he was doing in electronic music. I'm not really talking about Soft Cell here. Though this work was certainly a few steps ahead of the rest of what overtook the carts of the time, it was a few steps behind what was going on in Germany and even England (see Fad Gadget) at the time. Not much new ground, just undergound movements being worked into a more digestable, sellable format. Some of his solo work and collaborative work, however, contained blueprints for a lot of what we hear today in electronic pop (or, electronica, if you must).

In the early 70's, Faust was already in the 00's. Their mischievous noodlings and prankster electronic rock was almost a genre unto itself. With Can and Kraftwerk alongside, they created blueprints for MOST of British, German, and American electronic robot-pop sound we now hear as new (see Chicks on Speed, much of WMF records, even The Faint).

Now, David Ball remixes a Faust song three different ways and what strikes me the most is this; it's almost sounds outdated. So, why? Was that in itself a statement? Was it any accident? I don't have the answers so I'll let you decide. One thing I can say with certainty: it's pretty fun listening. Will it break any new ground? I don't think so. Faust themselves haven't broken much new ground since their comeback of the mid nineties.

I thought David Ball might help throw things forward a little, and at moments, he does. But no. I'm curious to see what comes out of this. Probably not much. Fun listening. That's about what this amounts to. The third remix (ellapropella remix) does go to some very interesting places, much to its credit. But overall, I feel like it's all been done- regardless of the fact that these were the guys who did it.