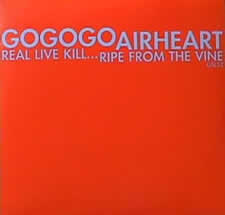 GoGoGoAirHeart are a band from San Diego with three LPs and five years of history. They did a split LP with Los Cincos several years ago, and a split with the 90 Day Men.

GGGAH is a band which for the last five years has consisted of A. Vyas (the bass player) and Mike Vermillion the singer. The rest of the bass is different depending on the record! As for the past two years the other members include Ben White and Jay Hough, with a brief reappearance of Andy Robillard on the trap kit.

This is their first release for GSL and their first recordings of the new lineup with two drummers. The 2 songs are actually one song split between two sides, just as Television did on their debut single Little Johnny Jewel.

The feel of Real Live Kill and Ripe From The Vine is musically like The Clash's Magnificent Seven with vocals styled after The Make Up.

GoGoGoAirHeart fit into the US scene of bands like !!!, Outhud, and The Rapture. They sound right at home on GSL.