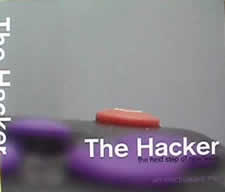 You've definitely heard the name. With the recent surge of music press about the electroclash/synthcore scene, who hasn't heard of The Hacker by now?

So far, he is most known for his collaborations with the sultry Miss Kittin. Like his superstar partner in crime, The Hacker (Michel Amato) is from Grenoble, Switzerland.

His first hardcore techno group, XMF, was formed in 1993 with Benoit Bollini (later known as The Money Penny Project). Three years later, he embraced the sounds of the Detroit techno/electro scene, went solo, and re-named himself The Hacker.

Listening to his work with Miss Kittin, one can't help but cite musical references to early Soft Cell, Depeche Mode, and the late 70s disco sounds of Giorgio Moroder.

In 2000, he released his first solo album Melody en sous-sol on GoodLife Rec., and this mix CD on Human Records. This is the 6th CD release on Human, a subdivision of Uwe out of Paris. Uwe started in 1997 as an industrial/hardcore electronic label, but the CDs on Human seem more varied: drum n bass, jungle, house, and old and new electro.

'The Hacker: The Next Step of New Wave' was released, as the new movement of electro was really growing in popularity. It begins with Scientist, the best cut off the Dopplereffekt full-length, 'Gesamtkunstwerk,' which was added to the Gullbuy exactly a year ago. Even though I loved this song when it first came out, I think some of the other tracks on this compilation deserve more attention.

Heinrich Mueller's complete reworking of Le Car's Cinematic-Automatic follows up Scientist. Besides Le Car, Adam Lee Miller makes two other appearances on this CD: on track 4 as part of Plasma Co. (his project with Nicola Kuperus before ADULT.) and on the Hacker remix of the ADULT. hit Hand To Phone (#15). The Hacker's take on Hand To Phone is excellent, but, if you're hungry for something different, Plasma Co.'s Modern Romantics might be right for you. It's the finest example Miller's transition between Le Car and ADULT. He sings through a vocoder and Nicola sings in a less aggressive fashion than what we are used to hearing. (Side note: This song was originally released as a 12inch single on the Koln-based label Electrecord. Also, the brand-new limited edition ADULT. 7inch (Run Run Crying) has an awesome remix of Modern Romantics on the b-side.)

On this mix CD, the transition between Modern Romantics and I-F's Secret Desire is one of The Hacker's best. It delves into the darker side of electro that I-F does so well. Perspects's Tender Taming (#7) was one of their strongest tracks on their 12inch released on Ersatz, yet I like their song Desire & Efficiency more.

A few weeks ago, a CD EP by Artist Unknown (one of I-F's label mates on Disko B) was added through the gullbuy. I agree with Carl that the vocals on Anthem sound a lot like Peter Murphy's. We hear the original version on this release (#8).

Like the Hacker, Oxia has also released music on GoodLife. Oxia's Story (#9) is an impressive example of very danceable electro funk. Next, Dopplereffekt makes another contribution to this CD, but as Japanese Telecom with Japanese Animation (#10), which is a song featured on their Intuit Solar full-length (their first record).

Another great song worth checking out is an instrumental called Visualize (#13) by The Advent (a.k.a. Cisco Fereira), whom I first heard from a salesperson at Khan's record shop in NYC called Temple. This is one song for fans of the Viewlexx and Gigolo labels.

In general, out of the three Hacker songs on this release, I enjoyed the second version of Fadin Away the best (#18). Overall, it's faster than his work with Miss Kittin, and has some synth melodies that definitely remind me of New Order. The compilation ends with Random Factor's Broken Mirror (#19), which has a Human League/Pet Shop Boys sound to it (the beginning sounds just like HL's Don't You Want Me). I listened to this compilation many times and often didn't quite make it to the end. When I actually did, this song was a great surprise with its early 80's European synth-pop references and nice male vocals.

Another electro mix CD I would recommend is called 'Elektrophysix' (on the Area Code 221 label out of Germany). In contrast to 'Electrophysix,' The Hacker's mix is definitely better for radio play. On many dj mix CDs, one often hears obvious transitions (it's a mix album after all!). Here, the transitions are more apparent at the END of each song, not in the beginning.