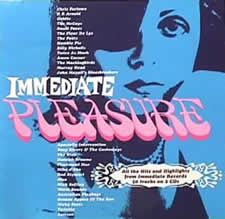 British label Immediate Records was one of the prime stomping grounds for some of the best pop and soul confections to come out of that little Isle during the 60s heyday.

Including many acts little known to us on these shores such as The Small Faces, Chris Farlowe, The Nice, Humble Pie, P.P. Arnold, Amen Corner, The McCoys, Rod Stewart (in his early days), Duncan Browne and Billy Nicholls all collected on this fabulous 2-cd set.

Generally speaking this music is not Beatlesque, vying more towards the soulful sounds of Motown influence or the Rolling Stones.

While this might not be the place to get to know the Small Faces (they are best delved into in their own collections) there are some prime examples of why they are one of the greatest bands of all time. You can't go wrong with Steve Marriott and Co. on such tracks as CD1 #15 Here Comes the Nice, CD2 #5 Lazy Sunday or the soulful grunge of CD2 #12 Afterglow (Of Your Love).

Other highly esteemed acts that are more fitting to a compilation atmosphere such as this one are Chris Farlowe and P.P. Arnold. Farlowe's best material are his Rolling Stone's covers - CD2 #3 Out Of Time, and the Jagger/Richards tunes the Stones never recorded so hear them here - CD2 #16 Ride On Baby and #19 Think. His bizarre sitar- drenched version of Moanin' CD2 #13 sounds like a samplers dream now with it's sitar, now beat and distorted guitar riffs mixed with groovy horns. P.P. Arnold does some excellant soul vox on CD2 #1 The First Cut is The Deepest and CD2 #21 The Time Has Come - both also done at what time by The Koobas.

Billy Nicholls is represented by his two greatest songs CD2 # 10 Would You Believe and CD1 #10 London Social Degree.

Nico even recorded for a time for Immediate - in a more folk rock vein which should be heard to be believed - quite nice stuff really - CD2 #7 I'm Not Sayin' (a Gordon Lightfoot song).

If you want to hear a Rod Stewart with some actual soul - check out his duet with P.P. Arnold CD2 #14 Come Home Baby - pure golden Motown-influenced dueting bringing out the best in both artist - a high neither would ever reach again.

Other highlights include CD1 #3 Goldie (of Goldie and the Gingerbreads with a very soulful cover of Carole King's Goin' Back, CD1 #6 Fleur De Lys excellent cover of The Who's Circles, and The Poets - soulfully mod Baby Don't You Do It CD1 #7 doing it up as the best Scottish rock group of the mid-'60s could only do it.

There are few clinkers I would stay far, far away from - including CD2 #8 Mick Softley's tepid I'm Not Confused, Twice As Much's lame version of the Stone's Sittin' On A Fence (CD2 #6), and Golden Apple's Of The Sun un-inspired take on Major Lance's Monkey Time (CD2 #15). These tracks, while detracting because they suck, don't ruin the collection because it is so sprawling in nature to begin with. All in all Immediate Pleasure gives us immediate results.