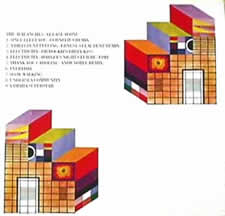 A solid remix can be like seeing a good friend completely trashed. Here's this other side to a person you know so well, quite different and somewhat interesting, though only is the rare drunk more venerable than his sober self.

This is a way to think about the latest CD by the oft-hyped Avalanches, titled At Last Alone and released by Japanese imprint Toys Factory, which features five remixes of tracks from 2001's Since I Left You, three unreleased tracks from 1997, and a B-side.

It's hard not to be immediately biased by the steep asking price of this import, and At Last Alone never really overcomes its monetary hype. Of the remixes, there's the prerequisite Cornelius remix, a more chill, sober take on Since I Left You, easily the most catchy and recognizable song from the full length.

The two Electricity remixes work well beside each other, for as the 'Harvey's Night Club Re-Edit' seems to toy with the original, the seven-minute long 'Dr. Rockit's Dirty Kiss' strays completely, breaking it down and beautifully exploiting its dark groove, while giving it an almost industrial beat.

Ernest St. Laurent's version of A Different Feeling is forgettable, while Andy Votel's remix of Thank You Caroline might be the most (college) radio friendly track on the album, if only for its anticlimactic ending.

The three old songs, on the other hand, provide some insight into the evolution of the Avalanches. They're not at the height of the sampling madness they mastered on Since I Left You, but the soulful, white-boy crooning on the loungey Slow Walking and Undersea Community's hip-hop collages might be the genesis of Since I Left You.

The problem is, though, those tracks, like the remixes, only really complement one's appreciation for the Avalanches. The true Avalanches experience still remains in the bevy of samples and playful grooves on Since I Left You.