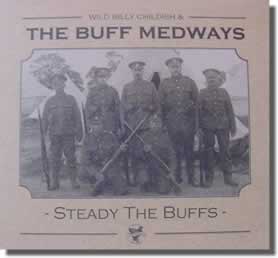 'Steady the Buffs' is the second full length from Billy Childish and his Buff Medways following last year's excellent debut 'This is This.' The album is also their third release for Transcopic Records, the label founded by Blur guitarist Graham Coxon, and if you're a fan of Billy's output with the Medways thus far, this one will not disappoint.

While at first listen 'Steady the Buffs' seems a bit toned down compared to 'This is This,' be assured that the Buff Medways can still rock harder than most stuff masquerading as garage-influenced rock-n-roll these days. What I find most appealing about this second album is how it shows Billy further sinking into the 60s-rock influences previously evident in the Medways' choice of covers.

Though 'Steady the Buffs' does include the previously-released cover of the Who's 'Ivor' as well as a Kinks cover ('Misty Water'), I hear much of the album moving into the distilled straight-ahead/R&B-influenced rock that predates both bands. The hand-claps and expert backing vocals from bassist Johnny Barker color the record as one of subtle craft that, while limited to the blues-based rock formula, retains a vitality that seems to follow Childish around.

Wild Billy's signature guitar sound is, of course, all over 'Steady the Buffs,' especially in the album's previously-released single tracks: 'Troubled Mind,' 'A Strange Kind of Happyness,' and 'Archive from 1959.'

I will not even try to pick favorites from 'Steady the Buffs.' The four songs I'd heard before sound great among many fine ones. The Buff Medways keep getting better, and I hope they keep it up!