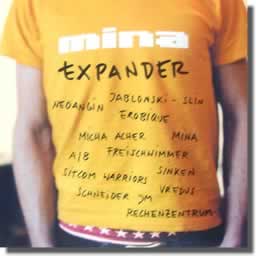 I'm no big Mina fan by a long shot, but when Carl asked me to review this cd, my curiosity was perked by the Mina remix concept. When I gave this disc a listen I was mighty happy to be the one writing the review. I'm here to tell you that it is not easy to mix a regular rock band with electronica. If given the chance though, interesting results can occur. The bottom line is you get tons more variety and the chance to please more people in the process. I've split the tracks up between the electronic and the more rock- oriented mixes.

+1. Rechenzentrum have been a favorite of mine in recent years, and they start things out with a minimal but tense version of From A to B Yourself. It's got a slowly building apex, and is not far behind their very own Peel Sessions. When the rhythm kicks 2:30 minutes we've had a good amount of time to enjoy the intro, and then we get a good four minutes of beats and synths. My only complaint would be the odd key change about 4 minutes in.

+2. Mixing right into Freishwimmer's mix of TBA, this is one of my favorite tracks on the disc. They are somehow able to incorporate a solid real drum rhythm with many percussive accents, warm synth organ sounds and a driving bass. The stops and starts build-up is priceless. When the techno synth and the 'I'm as mad as a hell' sample comes in at around the 3 minute mark there is a great 'live mix feel going on'. That is what sends this tune over the top.

7. Mina remix themselves once again on Lovers Electro Rest which is exactly that, a pleasant paint by numbers electro piece. Nothing very intriguing here, but not horrible either. Nice echoed synth solos going on contrasting with the synth bass solo.

+8. A/B remix A to B, funky mellow style. Slowly seething synths. I really liked this mix, it's so smooth. It's almost got an urban Marvin Gaye or Quincy Jones production value. If not for the dub overtones which permeate the end of the mix.

12. Sinken do a different mix of TBA, this is more the handclapped rhythm treatment, and to be honest didn't do much for me, sounding too dated to my ears. When you feel like a track sounds like a drum machine has been left on an unattended, you know to move on.

+3. Erobique do Desktop - starting out sounding like its going to be loungey plucker, when some echoed blissgal vocals come in pretty much alone - until an electro fade-in rhythm gets things going in full driving fashion. The simplistic splashes of lounge keyboard melody add just that bit of twee that was needed and pleasing. But best of all is the stop in rhythm and the vocals get to be alone. This makes the bass that much more exciting when it decides to revisit. My only complaint would be that, at 7 minutes, this song could have been better shorter.

4. I've so not been into guitars lately, I think, because this track is full of them, and I did not like it one bit. (Sitcom Warrior mix No. 6). The vocals remind me maybe of My Dad is Dead and is the best thing about this track, warbling and over emotive. But really, what it is I don't like though this just reminded me of a local band that you only pretend to like.

5. Mina mix themselves doing Theme From Arkanoid (an instrumental rock song), and this to me is a lot more interesting than Track 4. Pounding echoed drums, distorted bass, and Factory styled guitars make for an interesting combination. I could do without the Star Wars game effects, however.

+6. Neoangin give us an interesting take on No. 6 (also done on track 4) and I liked this mix a lot more than Track 4. Electro rhythm and guitars mixed with percussiveness and cheesey synths, and without the lead vocal.

9. Really not rock, as this sounds more like a jazz workout, but it certainly isn't electronic music. Micha Acher brings us this interesting rhythmic mix of Boyroc/Lovers Rest, with it's percussive center and haunting horn motifs, and flute solo. I'm not sure this ends up as a favorite of mine, but it certainly was a good one.

+10. Jablonksi - Slin's version of Tracks MS works more as an instrumental interlude and brings to mind the local band the Swirlies. I really got into this one, with it's broken rhythms and looping flutes, though like i said it doesn't really go too far. Those flute loops are damn fine and addicting. 11. Vredus, combining rock and electronic, mix Girroc, there's a surf lead guitar, but with an electronic rhythm, and the end results sound not unlike a soundtrack theme.

13. The Schneider TM mix of Guestpop sounds just like Beck, it's almost frightening, but maybe if Beck were to jam with Vincent Gallo. I'm guessing that description alone will scare people off from this track, but it really does have a fun playful feeling. Without name dropping anyone, it could be described as laidback male vocals, with a jazzy backing, hummed background vocals and jazzy guitar accompaniment. There's an odd imitation of a horn solo in the middle too.