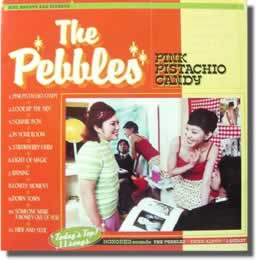 When this I saw this CD I had one of those 'that band is still together?' moments. Aside from a string of 7inchs in the early/mid-'90s and a late '90s CD, I didn't know of any other releases. Well, what the hell do I know? Pretty much the only other thing I can think to mention is that I seem to recall that a member or members were girlfriends with a member or members of Jackie & the Cedrics. But please don't quote me on that.

Upon hearing their brand new full-length (their fourth, actually), I found that the band I knew as a fun yet somewhat sloppy '60s Beat-influenced Japanese girl group (quartet to be precise), has become a considerably more polished trio (with a male drummer, no less). The '60s pop influence is still there, but they don't really rock like they used to.

Some songs do reveal the band's Beat roots, but those are on the more shiny pop Beat side (c.f. Gerry & the Pacemakers, Freddie and the Dreamers) than the more rockin' (c.f. Hamburg-era Beatles) stuff that eventually evolved into freakbeat.

'Lovely Moment' has a great upbeat sound that veers between the Beach Boys and classic US girl group sound (and also probably comes the closest they get to revisiting their Beat roots). My fave cut on the album.

'Square Box' is one of the more dense sounding tracks, with minor key flourishes, in the same sorta vein as those '60s garage 'bummer' tracks.

'Someone Make a Monkey out of You' [sic] borders on the garagey, with tambourine and fuzzy guitar.

For those people who like to compare all Japanese bands with female singers to Shonen Knife, I make this concession: I wish there was a song as fun and Shonen Knife-like as The Pebbles 'Look Up the Sky' on SK's disappointing (at least upon first listen) new album, 'Heavy Music.'

I'd have to say that, all in all, PINK PISTACHIO CANDY is a refreshing record, perfect for summer. Pour a nice cool drink with plenty of ice and enjoy!