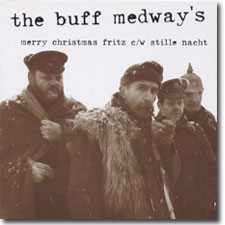 Merry Christmas Fritz finds Billy Childish and his current band The Buff Medway's trading familiar ground, but - as usual - doing it in such style that the single is a joy to hear.

Merry Christmas Fritz is a scorcher of a song with a decent recording. I usually don't talk about the quality of a recording, but with Billy Childish you need to: some of his releases make cassette tapes sound polished.

I guess that relates to the B-side. Stille Nacht is a German version of Silent Night recorded on wax cylinder just like the old old days, which Billy seems to be focusing on, looking at the outfits he and his band wear (World War 1 styled outfits). The music is played on accordion, with vocal accompaniment by the band. The song is played all the way through, faithfully to the original. the last verse is acapella.

The Buff Medway's version of Silent Night is more of a Buff Medways curiosity than a song you will want to get pumped up to, though it DOES make you feel a bit warm and fuzzy...