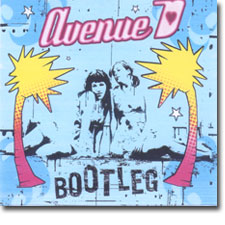 Avenue D are a duo (Daphne and Debbie) that rose to fame during the Electroclash scene of 2002 with their song Do I Look Like a Slut?

Bootleg is a self-released CD full-length that has 8 songs and clocks in at 26 and a half minutes.

Five of the eight songs are so filled with expletives that you have no hope of ever hearing them on the radio. The remaining three songs (Bang!, Donkey Punch, and O-Tron) have plenty of nasty imagery, but language that could slide by on most radio stations.

Is the record valuable for anything beyond shock value? Definitely - many of the songs are really good.

Stick It In!!! has many changes. there is the basic song, a Spanish rap that is really nice (reminds me of Atom & Tea Time), and a girl group Rn'B part like a street wise Beyonce.

2D2F (Too Drunk to F*ck) has nothing to do with the Dead Kennedys song of the same name. It is sung to a boyfriend that spends too much time in the club and gets too drunk for the main event when they get back home. Like Stick It In!!!, the music is basically simple electro, but the gals are very creative with the material.

The Sex That I Need has the girls with a guy named Cazwell. The girls are saying what type of guy that like. Cazwell talks about his street smart rentboy sexcapades involving men.

Bang! is my favorite track on the disc. It talks about making a bomb, but really is about politics, with lines applying to the 2004 Presidential election ("Nobody voted when it was vital, but you were sure to vote for American Idol").

Donkey Punch is a pretty raunchy song about plugging a girl from behind. Mikey Lamar does a vocal that sounds like DJ Assault and the whole ghetto-tech thing.

O-Tron should really be called Orgasmatron, but i guess Avenue D didn't want us to get it confused with the Motorhead song of the same name. This is my second favorite track on the disc. There is a slight Chicks On Speed feel to the song with its rock styled electro, but it is quite super and not derivative of anything.

Punk Rock Song makes me imagine Nancy Spungen with Sid in their heyday. It is a pure abandonment sex song encouraging your lover to go crazy with you.

Avenue D in the gullbuy: