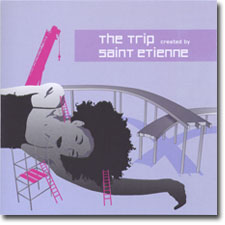 If you ever wondered what it might sound like to hear the members of Saint Etienne djing, well here's your chance.

The Trip is a 2 cd set chock full of gems dug up from the vaults of Universal and is another excellent entry in this series (which also has compilations by Dirty Vegas, Tom Middleton, and Tim Love Lee).

Those of us who like the slinky rhythms of Serge Gainsbourg, the soulful sides of Motown, the breezy soft pop, and psychedelic 60s will revel in this sweet mix cd - and it's all mixed together with those soundbites Saint Etienne have sprinkled on their own albums.

Disc one centers its attention on the Serge Gainsbourg / Ennio Morricone / Lalo Schifrin slinky soundtrack sound with the soulful Motown and garage rock sound rather well. Highlights include:

Serge Gainsbourg - Cannabis - the theme song from the Jane Birkin film and a soundtrack which is still way too elusive for those who would love it. Serge bends your mind with some acid rock guitar for this theme.

Brinkley & Parker - Pander Man - This Norman Whitfield/Temptations styled funk track grooves along is taken from the Darnel single - Don't Get Fooled by the Pander Man.

Esther Williams - Last Night Changed It All - The song that says it all for anyone who has spent a night out dancing after some crushing life blow.

Marvin Gaye - Symphony (Undubbed Version) - For those Marvin Gaye fans out there, a track you may not have heard before.

The Mamas & The Papas - Shooting Star - a rare shot in the night from the later period from this influential vocal group when they put a northern soul spin on their sound quite effectively.

Ennio Morricone - Deus Irae Psychedelico - This cinematic treat sets the tone for the latter half of the first disc.

Lalo Schifrin - Jaws - Schifrin did a handful of funky disco theme songs for Creed Taylor’s CTI Records in the mid-1970s like Amityville Horror, Dirty Harry, Planet of the Apes, and Enter the Dragon, but Jaws is among the best of them. It was a fast club favorite in the late 70s thanks to the basswork of Anthony Jackson (the man behind The Sound Of Philadelphia and co-writer of For The Love Of Money) and Hubert Laws on flute.

The Isley Brothers - My Love Is Your Love (Forever) - This Ivory Joe Hunter/Stevie Wonder Northern soul classic was also recorded by Smokey Robinson & the Miracles on their Make It Happen album in 1967, but this version is taken from when The Isley Brothers hooked up with Motown for a brief stint also in 1967 on the Tamla Motown Presents the Isley Brothers album.

Foster Sylvers - Misdemeanour - a rare groove track with a Jackson 5 sound and an 80s electro feel to it but was in fact released in 1973.

Disc two heads full long into psychedelic and soft rock territory and might not appeal to those searching for grooves, but for those of use who dig the softer side this is full of incredible sides like Spanky & Our Gang, The Sandpipers, The Poppy Family, Roger Nichols & The Small Circle Of Friends, Orpheus, Queen Anne's Lace, Alzo & Udine, Dusty Springfield, Scott Walker, Tim Hardin, The Left Banke and Julie Covington. Some highlights which I really loved include:

Spanky & Our Gang - Like To Get To Know You - I've just heard Spanky & Our Gang have a boxset coming out (after I just finished collecting together their rare collectible lps. This song could be the song to sway those into the soft pop territory who may have been teetering on the edge.

The Sandpipers - Never Can Say Goodbye - I've always underestimated this group mainly because of the crackly vinyl records I'd heard them on, but they truly sparkle on this soft pop gem which I've also been loving by the incredible Aldemaro Romero & His Onda Nueva. This is the perfect soft pop song thanks to its percolating rhythm, soft sheen and lyrical confusion.

The Poppy Family - Free From The City - The Poppy Family were a Canadian pop group which featured the ice queen Susan Jackson vocals and Terry Jacks who later gave us Seasons in the Sun. This group epitomized the moral decay of city living with the extra added bonus of sitar and tabla.

Mandy More - If Not By Fire - this is not the Mandy that's around nowadays, this is some obscure release on Philips from 1972 which combines a piano dirge with some mighty wah-wahed guitar. This moves into Ice by Ice Man which keeps the psychedelic pop vibe going.

Roger Nichols & The Small Circle Of Friends - Snow Queen - the soft pop genius of Roger Nichols is presented in one of the few songs he didn't co-write from his sole lp from 1968. Anyone needing a soft pop primer needs this song and this album.

Alzo & Udine - Something Going - anyone who needs a little more contemporary rhythmic soul in their lives should go out of their way to find the incredible music of Alzo & Udine. Alzo & Udine - and later Alzo with his solo albums honed a rhythmic sound that combined the lyrical and rhythmic elements of Paul Simon with the yearning of David Bowie's vocal sound for a unique sound. Once you've felt the magic and the Alzo touched side of music, you will never be the same.

If you're interested in more Saint Etienne mixes, check out Saint Etienne Presents Songs for Mario's Cafe which was also released this year.