3 song single starring the best song from the 'Spanish "Dance Troupe' CD. "Poodle Rockin" has the zest of Ziggy-era Bowie and really moves. The first new song "Flu Music" is a 4 minute keyboard driven instrumental (basically) that is almost downbeat, like something Kid Loco might concoct. The other new song "The Girl I've Always Known" is a sweet wilting acoustic 2:30 song with structure and melody: harmony vocals lift the tune over your head - just where I'm sure they want it. This song sounds like it could fit on the LP by Matching Moles, Robert Wyatt's post-Soft Machine band. 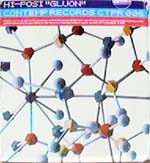 The first CD from 1998 by this Tokyo duo which stole the hearts of many of us at WZBC with their CD5 and the 4N5 full length. Hi-Posi are Masayuki Kumahara (programming) and Miho Moribayashi (vocal & chorus). Hi-Posi sound irrevocably modern, like a more electronic, less kitsch Pizzacato Five. If you open their website you can see three videos, plus hear some of their songs on Real Audio or QuickTime. Unfortunately Hi-Posi's discs are not easy to come by and are expensive when you do. I hope that this disc charts at WZBC as the other one did, that a US label puts out their stuff here in states, with their other singles tagged on as bonus cuts. Japanese 7"s are very difficult to get here, and always sell out in Japan quickly too. H-Posi just put out a new 3 song single with a version of "Video Killed The Radio Star" (The Buggles song), which I'll bet they treat with loving modern care. 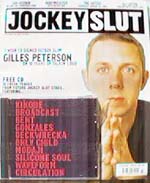 10 song compilation which spans many styles, all staying true to the small printed declaration which makes up the back cover, "Disco pogo for punks in pumps". Jockey Slut is the more-music sister magazine to Sleazenation , the great UK style magazine which has the moment perfectly captured (at least for me) every issue they print. Sleazenation covers music too, but much more nonchalantly than Jockey Slut. Jockey Slut has the same great sensabilities and sophistication as it's sister mag. This disc captures all that in its bits and bytes. Kinobe and Broadcast play loungey tracks. Bent, who are on their third well tipped 12" on Sport Records, have an Air-ish instrumental. Gonzales is outrageous with "The Worst MC" (which we have on his first 12"), Deckwrecka have a dub-hop feel, Modaji a downbeat style, and Only Child, Silicone soul, Waveform, and Circulation a modern house-ish sound that is not as intimidating as it may sound in print. Great comp with a great zine. Subscribe!

Compilation with 20 songs from this Hamburg labels 11th through 20th singles releases. Marsh-Marigold is a real force in the German pop sound. The label has festivals which feature their bands, and they have released many full lengths and singles by bands that have moved on to bigger labels and wider recognition. A neat thing about this label is that it was one of the very first to take pride in native German speaking bands. I have heard it said that Busch (who have 2 songs here) have the best lyrics in terms of content and the way they work in German. I believe that the creation of Apricot Records was strongly influenced by Marsh-Marigold as well. In fact, Brideshead's full length is on Marsh-Marigold. Brideshead is the band which Hanns-Christian Mahler, one of the creators of Apricot (and more recently Shibuyahot) Records, plays guitar. On this CD you have bands from Germany (Busch, Die 5 Freunde), Sweden (Red Sleeping Beauty, Seashells, Acid House Kings), France (Caramel), and undetermined origins (50,000,000 Elvis Fans Can't Be Wrong, Red Letter Day, & Poprace). Lots of high quality stuff in a similiar vein, ripe for the mining to find your own favorite.

Currently my favorite band (along with the amazing Chicks On Speed ) Saint Etienne remind me time and time again of The Jam at their peak. They refuse to sit still, even when they confound their fans, and their material is always point bland excellent. I think this CD is stunning. It combines the two 12"'s Mantra just put out (only leaving out the instrumental mixes by Dot Allison and Aim, which followed their regular remixes on the 12"), and has a great 9 minute enhanced video for the title song. That song ("How We Used To Live"), named after a 70's children's educational show, is just perfect as far as I'm concerned. It flows smoothly through it's three (sort of) sections. Most great bands have one person with the creative edge that makes their band excellent: Saint Etienne have 3 such members. Bob Stanley (who also ran the label Icerink Records) plays guitar and writes, Pete Wiggs plays keyboards, and Sarah Cracknell sings, but each complement the other intuitively and inobtrusively. Bob and Pete also DJ in clubs a bit these days as well. During the 80's The Jam were my favorite band. All of the qualities I loved best about them are in this band, plus the fact that they have their eyes firmly on the future. To Rococo Rot produced their new record (The Sound Of Water). You can hear the influence of To Rococo Rot in the 2 instrumentals on this CD ("Roseneck" & to a lesser extent "Red Setter"). As much as I love The Jam, Paul Weller has not been able to keep up while keeping true. Saint Etienne does THAT with style.