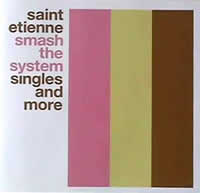 I didn't have to listen to this one to learn the songs so I could write a review - these songs are already hard wired into my heart and soul.

Saint Etienne came into my life a couple of years ago - late by many long time fan's barometers, and leapt straight to the top of my consciousness in lightning bolt fashion.

I came to love this band so fast that I never bothered to learn the names of the songs I loved. I would just absorb the tunes and the lyrics.

Never had I loved a band with less pretense about them. Saint Etienne were not "stars" - they just sounded like them. It was very cool to hear the effect of 3 creative people collaborating on a band instead of one persons vision carrying a band's identity.

Too 'dance' for the underground, too 'strange' for the mainstream, Saint Etienne seemed to be a fan's band, releasing hard to find singles and Japanese CDs, and fan club only cassettes and discs that made me join a club for the first time since I was a kid.

This double CD set is like having studio versions of a Saint Etienne live show. Every song is well-chosen. Many discs pass through my hands via the gullbuy, but I will have to buy my own copy of this one quite soon.

I probably have all these songs on the original releases, but put together in this way the collection achieves life as something new and separate and worth owning.

Saint Etienne in the gullbuy:

How We Used To Live

The Misadventures Of Saint Etienne