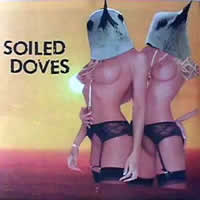 Soiled Doves are an all girl band from California named after an old west term for prostitutes.

They sound like a mixture of the Glasgow band Gilded Lil and the Ron Johnson Sound (a crucial C86 record label) band Big Flame.

The vocals growl like the girl in Gilded Lil, who herself is like a mixture of Kat from Babes In Toyland and Janis Joplin.

The guitars have the skittery sound that Big Flame borrowed and intensified from Gang Of Four, just as The Rapture and Radio 4 having been doing recently.