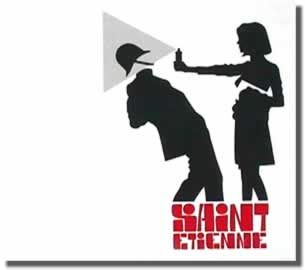 The new Saint Etienne single is everything I hoped it would be. Action is written in the style of the greatest Saint Etienne songs of the past, as compiled on the must have compilation Smash The System.

I was pleased to see that Bob Stanley lists the latest Donna Regina record among his current faves on the Saint Etienne Web site - I have favorably compared the two bands for some time now.

Action has a good beat, strong bass guitar beneath, clean guitar, subtle keyboards, and Sarah Cracknell's voice way up front. These are fine elements, but without a classy song they are simply technique. Action is a great song. The melody sounds instantly familiar, and the chorus sticks in your head.

Saint Etienne have released Action on 2 different CD singles and a 12inch. CD1 has the album version of Action plus two non-LP B-sides, while CD2 has 3 new mixes of Action, without including the original version (a nice touch - no repeating tracks between the 2 singles). Action is the first single from the sixth Saint Etienne album Finisterre, released September 30th. I have heard the record and like it very much.

The first of the non-LP tracks on the single is Anderson Unbound. It is a strong cut that will surely be played in live shows. Again, a very familiar Saint Etienne sound - almost as pop sounding as the songs on Good Humor, with backing vocals from the two gals who counterpoint Sarah in the band's shows. Anderson Unbound is the song to buy this single for.

7 Summers is the other non-LP song on the single. It starts with piano and vocal, and is more moody than Action or Anderson Unbound. It sounds like it could have been on Tiger Bay. 7 Summers is less immediate than the other two tracks, but could become a favorite with repeated listenings.

If you are contemplating buying this single right now - before Finisterre is released - I say go for it. All three tracks are keepers. If you are reading this review after the album came out, you still may wish to buy this single for Anderson Unbound.