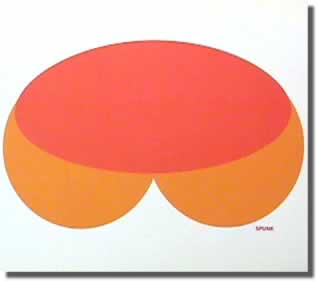 I've been playing the remix album Filtered Through Friends from the all-female improvisational group Spunk on my radio show all year knowing full well that it barely scraped the surface of what makes this Norwegian group so exciting.

Finally Carl has given me their album Den Øverste Toppen Pa en Blamalt Flaggstang (translates as The Very Top of a Blue-Painted Flagpole - a name which is inspired by the children's book character Pippi Longstocking - and in fact I have read they have even worked on children's music) to write this cd review and this album is amazing stuff.

I think Spunk are able to ride the line between improvisation and pop music (similar to how Björk does that - though Spunk are only remotely close to pop song structures) so that they should be able to be enjoyed by both schools - and that is part of why the concept of a remix album was not out of the question.

Truth be told - while adding variety to their sound, the remix album watered down Spunk. Not to say there isn't variety in this proper album, in fact the contrary, the sound becomes impenetrable on many more levels, making it an album which would take many more listens than even I have done - and I have been listening to this album everyday for weeks now. Elements come and go effortlessly, electronics modulating the acoustic, or acoustic elements fitting into an elaborate cycle of improvisation.

This could be the soundtrack to an obscure Maya Deren film from 40 years ago or as modern as the here and now - you just need to choose. At times there is a slow tide of movement over the spectrum of sound and at other times the chaos seems to be ever mounting. Spunk's first album is now on my list to acquire, it is named Det Eneste Jeg Vet, er at det Ikke er en Støvsuger (The Only Thing I Know Is That It Isn't a Vacuum Cleaner).