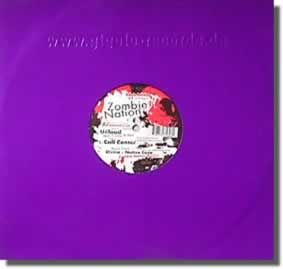 Unload is like a Giorgio Moroder/Donna Summers grinder dirtied up for DJ Hell.

It has the same sound that David Caretta uses, and even uses a guest vocalist he has used. Cassy Britton sings Unload.

Zombie Nation is essentially Florian Senfter, or Splank as he is called. He has also recorded as Kerncraft 400.

This 12inch is more massive than I had expected. Unload is a stormer. It has a pop edge to it, but is electronic all the way, and danceable as heck.

The B-side has 2 songs. Call Center has a straight Hi NRG disco beat and vocoder vocals. It is what I expected the 12inch to sound like, and is my least favorite song. If you like vocoder vocals (think I-F) you may like Call Center plenty.

The cover of Divine's Native Love is really great. It is probably my favorite track on the 12inch. I have never heard Divine's version, but I imagine that anything recorded by such an outrageous person during the first wave of disco in NYC must have been amazing. Of course I wouldn't have known, as I avoided disco like a good punk when it was happening.

Native Love is very percussive and has a cool synth sound. Based on the 'step by step' vocal, I'd say the New Kids On The Block (or at least their writers) had best fess up to stealing from a 300 lb. drag queen. Do you know what she could make you do if she caught you? If Divine is looking down from above, she would be very happy with this version, as will you.