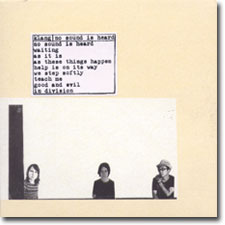 It's about time Donna Matthews from Elastica created some new music, but just like the band she came from the years waiting for her new trio Klang were worth the wait.

Released on a label called Blast First Petite which was created by Paul Smith from Blast First and Mute Records in hopes of releasing "wholly independent releases", the No Sound is Heard release is reminiscent of the Soul Static Sound label releases from the 1990s thanks to it's aesthetically gratifying low-fi artwork; while the sound of the music brings to mind a meeting of Krautrock simplicity and the muted female vocals of another 90s creation called Pram. It remains to be seen if Klang can be as prolific as either of those. This cd follows up a single released in 2003 on Rough Trade.

Clocking in at just under 27 minutes, Klang's minimalist approach makes for a subdued but intriguing listen. The sound of Klang is a meeting between Donna Matthews songwriting style - first heard on some of Elastica's less elastic more Wire-y tunes like Blue from their first album, or Nothing Lasts Forever from 6-Track EP - those little known songs that kept the surge at bay like a wave never cresting - and the minimalist rhythm of drummer Keisuke Hiratsuka and bassist Isabel Waidmer. No one will say that this group is full of virtuosos, but I think their influences would inform you of that fact.

The album sounds like a whole so that the best songs like Waiting, As It Is and Help Is on the Way seem to mutate into each other as the rhythm throbs through. It's only on such half formed songs like We Step Softly and In Division that I wish Klang had given a little more effort into fleshing this out.