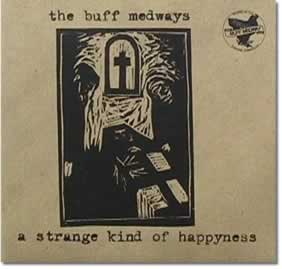 Every time I put on a new Billy Childish release for the first time I wonder whether it will rip me off my seat with casual genius or lose me by sounding like a recording from a rehearsal in a garage. Lately The Buff Medways have been doing both, with genius recordings that sound like they ARE recorded in a rehearsal space.

The A side of this single is spectacular. 'A Strange Kind Of Happyness' is one of those songs that make me believe in the spirit of rock and roll. The riff is simple and powerful, the verse rocks, and the chorus sticks in your head. When the band break into the bridge and Billy Childish lets loose his solo, it is bliss.

'Hound Dog' manages to make me like one of the most overexposed moments of rock once again. Billy Childish does not goof on the song - he performs this Elvis classic with a conviction that the recording engineer evidently did not share. This is the first Billy Childish related release on Graham Coxton's (of Blur) record label Transcopic.

Yet another label and yet another single for the man of a thousand hats and his fine new band.