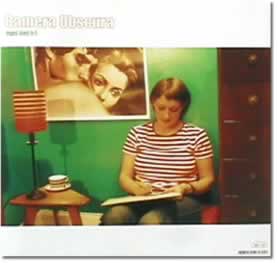 It's so appropriate that my debut in the gullbuy is Glasgow's Camera Obscura debut 'Biggest Bluest Hi-fi', as they were my introduction to Carl (creator of gullbuy). Three summers ago, I was in Newbury Comics one Saturday morning returning a single by the other Camera Obscura (a hardcore band from CA) when he came up to me enthusiastically saying 'Marianna, Marianna' I said ''m not Marianna, but do I know you?' and the rest is history.

This is effortless pop with wispy vocals and balanced arrangements. If you like gently played tunes that stay in your head long after the disc is over, this is for you. They have subtle lyrical twists that remind you of nascent friendships and relationships, of people to stay away from, and that bring out your inner loner.

'Happy New Year', Track 1 has a shimmering guitar line with brush drums and some great lines about a budding friendship; 'I would never tell you what to do, have ambition to simply see things through' and independence 'I know where I stand. I don't need you to hold my hand.' Tracyanne's vocals are a mask of self assurance to hide her uncertainty and John Henderson chimes in nicely on the chorus every time.

'Eighties Fan,' has some of the traits of Belle and Sebastian as it was produced by Stuart Murdoch, who helped arranged the strings on this disc. I think critics will inevitably compare them to B & S as a quieter version of them. It's an almost perfect pop song except for the second line in this couplet 'You say your life will be the death of you, Tell me, do you wash your hair in honeydew' but I can live with that. The arrangements are probably the most up front on this track, but they never get in the way of the track's summery sound and feel.

'House Boat' starts out with John singing and his voice complements hers really well on this track as he tries to convince her to give him a try and she can't get the other one out of her mind. The guitars gently weave around them and there's a nice ping coming from a triangle or some other percussive instrument.

Tracy sings 'Pen and Notebook,' in a quiet, melancholy way. The accompaniment is mostly in the background, until a trumpet part that really fits in the space of the song comes in. It's about one of those creative kids you probably knew, who kept it hidden from nearly everyone. It has a poignant rhyme about of all things, drinking, 'Your favourite colour is that of red wine, which brings me around to your favourite pastime.'

'Swimming Pool' recycles the riff from that Janis Ian's 70s chestnut '17inch. John and Tracyanne trade vocals again, to great effect. This song moves along nicely and reminds you to keep a sense of wonder, trust and romance with this refrain 'Don't get wise to everyone and everything. Leave a little room for some naivete.'

'Anti Western' is probably my favorite track. It has a slightly country feel. Tracyanne and John trade vocals at their best here as she spurns the skirt chaser with this parting shot, 'You listen to rubbish I really despise and tell me that sand is just grit in your eyes.' Of course, taste in music is important when choosing someone. This is probably the second most arranged track on the disc and maybe because of the country feel, not very B & S esque.

'I don't do crowds' reprises the theme from the first track about budding relationships and how easily they can be sabotaged ''d like to have company during thunderstorms, 'd like you to fall for me but it would soon turn lousy and wrong.' The arrangement here is also pretty up front. It's the third most arranged track and they recycled an organ riff from another 70s chestnut, Rita Coolidge's cover of 'Your love is lifting me higher'

'The Sun on his back' has a stark intro with just drums and guitar and Tracyanne's strongest singing. It has a chiming guitar part that makes your head go from side to side like those poodles on the dashboard of your dad's car that builds nicely on the refrain to her object of admiration 'and I will wear a badge to show my delight.'

'Double Feature' is the other quiet number on this disc. It starts out somber as the tom toms crash on the cymbals, almost overpowering her voice. The first half feels bleak until the break in the middle that lightens things up with a summery feel, (which is pervasive throughout most of this disc), but the rest of the song lyrics are decidedly not. I always like that combination of sweet vocals over bittersweet words. It's an apt metaphor for the endurance test that relationships, especially shaky ones, are. She sounds really down here, 'And our lives will fade as in darkness we will bathe.'

'Arrangements of Shape and Space' is a sunny instrumental that ends the disc. It's a nice bright spot after the bleakness of the last track. I rarely get through most instrumentals because I miss having words to sing along to, but this one circles pleasantly and overcomes the melancholy feeling of the previous track. It's a fine closer to what is a favorite pop album of mine.